Police in the Ashanti Region have commenced the screening of 245 persons suspected to be drug peddlers and prostitutes in a massive swoop.

According to the police, the exercise was conducted simultaneously in various parts of the region including areas such as Asokwa, Manhyia, Suame, Ejisu and the Tafo Pankrono Divisions.

Ashanti Regional Police Commander, COP Ken Yeboah, addressing journalists on the swoop described the exercise as one of the biggest swoops in the region. 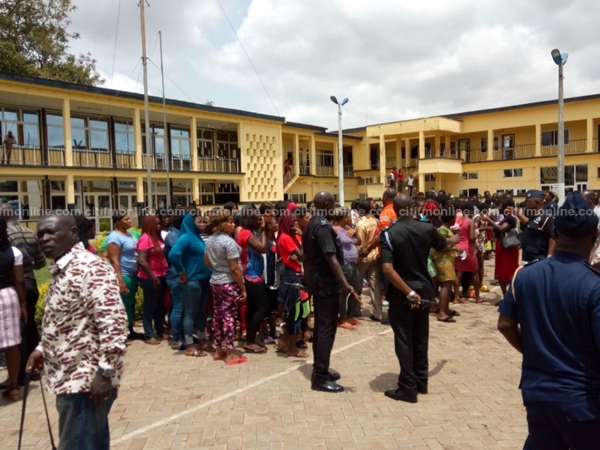 He said the command has commenced investigations and screening of the suspects, and those found culpable would be prosecuted to serve as a deterrent to other would-be criminals.

He indicated that, five (5) of the suspects who were found with substances suspected to be Indian hemp, have been handed over to the Drug Law Enforcement Unit for further investigations.

He added that, thirty-five (35) other female suspects also believed to be sex workers have been handed over to the Anti-Human Trafficking Unit for further investigations.

COP Yeboah revealed that, he will inform the Nigerian High Commissioner about the activities of some of his nationals engaging in illicit activities in Ghana, when he visits the Command on Friday, 13th October, 2017.

He warned that police will not give heed to persons who would want to intercede for some of the suspects.

Breakdown of the hideouts of the suspects:

6. Suame Division – Six (6) suspects were rounded up at Kotoko.