The desperate dig for survivors is resuming in Sierra Leone’s capital, after mudslides and floods claimed the lives of more than 300 people.

Their homes in Freetown were engulfed after part of Sugar Loaf mountain collapsed following heavy rain early on Monday morning.

Many of the victims were still asleep in their beds when disaster struck.

Vice-President Victor Foh has warned the final death toll may be far higher.

Another 3,000 people are estimated to have lost their homes.

Ishmeal Charles, a charity worker for the Healey Relief Foundation and Caritas Freetown, told the BBC words could not do justice to the scale of the tragedy.

“Of course you will see a huge number of people crying with those who have lost their family members,” he said.

“It’s very difficult to paint what the reality looks like, because it’s more scary and very sad and disastrous than anyone can be able to describe.”

In the worst hit area, the Regent district, where dozens of houses were submerged when the hillside collapsed at about 06:00 GMT, those who survived spoke of the family members they had lost – or still hoped to find alive.

“My wife is dead. My children are all dead. This morning my children and I talked before I left for work. One of them even chose the socks I should put on,” a man called Malikie told the BBC.

Another woman, called Adama, said she was still searching for her baby.

“We were inside. We heard the mudslide approaching. We were trying to flee. I attempted to grab my baby but the mud was too fast. She was covered, alive.

“I have not seen my husband, Alhaji. My baby was just seven weeks old.”

Mohamed Sinneh, a morgue technician at Freetown’s Connaught Hospital, told news agency AFP he had counted more than 300 bodies on Monday – and said more had been taken to private morgues. 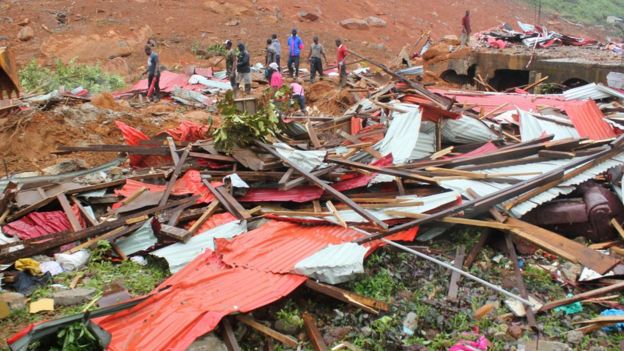 Fatmata Sesay, who lives on the hilltop area of Juba, managed to survive the mudslide after she and her family were woken by the pounding rain.

It was then they realised their home was submerged in water.

“I only managed to escape by climbing to the roof of the house when neighbours came in to rescue me,” she told AFP.

“We have lost everything and we do not have a place to sleep.”

In a televised address, President Ernest Bai Koroma urged people to stay away from the affected areas.

“This tragedy of great magnitude has once again challenged us to come together, to stand by each other and to help one another,” he said.

“Let me assure you that my government is fully engaged on this situation and in collaboration with our development partners we have already established an emergency response centre at Regent to coordinate our response and to provide relief to the survivors.”

Flooding is not unusual in Sierra Leone, where unsafe housing in makeshift settlements can be swept away by heavy rains.

The rains often hit areas in and around Freetown, an overcrowded coastal city of more than one million people.

UT & Capital Bank workers to be put on probation