Floyd Mayweather put up a startling performance as he worked to stop Conor McGregor in the 10th round of thrilling boxing action in Las Vegas on Saturday night.

The knockout came at a time when McGregor had absolutely nothing left despite winning the first four rounds.

From round four, Mayweather turned the fight on its head.

McGregor, with the little boxing ring experience he has, did give him something to think about during the fight.

Mayweather after the fight said McGregor was a lot better than he thought.

“He (McGregor) is a tough competitor and we gave them what the fans wanted to see – I owed them for the Manny Pacquiao fight.

“He was a lot better than I thought, he was a tough competitor, but I was the better man tonight. Our game plan was to take our time, let him shoot his heavy shots and take him out at the end.

“In the MMA he fights 25 minutes really hard and after 25 minutes he starts to slow down. I guaranteed everybody this would not go the difference. Boxing’s reputation was on the line.”

McGregor, however, said he thought the referee should have allowed the fight to continue till Mayweather was able to put him down.

“I took the early rounds pretty handy, he adjusted. He’s composed – not that fast or powerful, but boy is he composed and he was making me throw.”

“Fair play to him, what a career he’s had. I thought it was a little early with the stoppage. I would have liked to have hit the floor, he (the referee) should have let me keep going. I was just a little fatigued. He was a lot more composed under the shots – that’s what 50 professional fights will give you.

“I’ve been strangled on live TV and came back, so I would have liked him to have let it go. It was some buzz. I thought we were close. It was fatigue. The referee could have let it keep going, let the man put me down.

“No one is taking these kinds of risks. I’ll take it on the chin, it’s another day for me.”

See the official scorecard below: 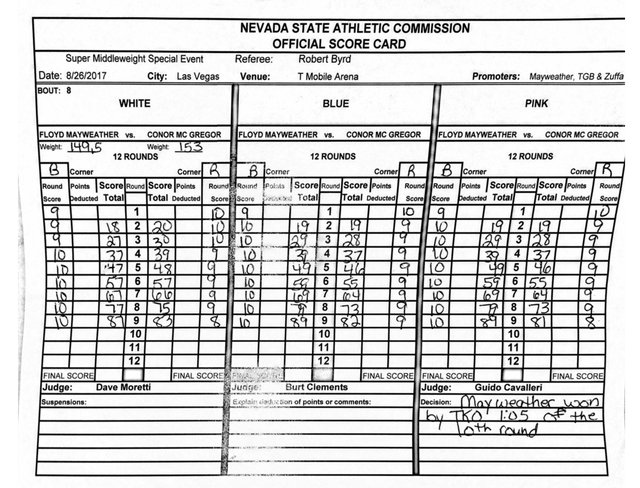