The Food and Drug Authority is investigating the poisonous fish incident in the Kpando Municipality in the Volta Region which led to the death of four persons.

The FDA said checks in some markets in that area showed that traders avoided the puffer fish which is believed to have caused the deaths. The affected communities include Alavanyo, Kpando and Tokor.

[contextly_sidebar id=”6iSnAa7aCj7SQ9i7eGYcwXV645UY0xpY”]However, it is in talks with the Ministry of Fisheries and other agencies to intensify the education on the dangers of consuming the said fish.

Speaking to Citi News, James Lartey, the Public Relations Officer for the Authority said the FDA officers “together with the fisheries department in the Volta Region and then the Municipal Assembly embarked on an exercise where the visited a number of markets and all the markets they went to did not have any sample of that fish.”

“According to our officer, the women at the market were saying they know it to be it’s a poisonous fish so it is not a fish that is sold there.”

There will also be a meeting between the FDA, the Municipal Assembly, and some stakeholders draw a plan to create awareness.

“I was told they were already aware of that particular fish but there is the need for further education so I am sure when they meet, they will be able to trash all these things and strategize on communications so they will be able to better inform the people on that fish,” Mr. Lartey said. 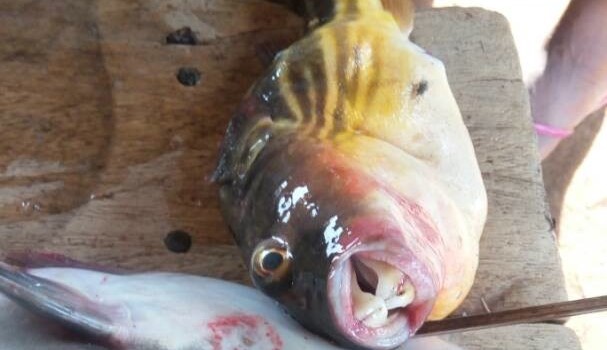 Four people died at the Margret Marquart Catholic Hospital at Kpando, where they had been rushed to after eating a type of freshwater fish commonly called puffer fish, also known as balloon fish.

Three deaths were recorded two weeks ago with the latest occurring yesterday [Thursday] when four more persons were rushed to the same facility.

One of them was successfully treated and discharged while two others, a man, and his wife are still on admission.

Even though it is still unclear how the fish may have caused or contributed to the said deaths, some residents have attributed it to the ill-preparation of the fish before consumption.

They say the fish contains some poisonous substance which required proper cooking.

The Puffer fish is characteristically said to swell up when it senses danger to scare its predators. It is known among fishing communities and the folks are often warned against eating it.