‘It costs more calling Nigeria from Ghana than USA’

It has emerged that Ghanaians and other nationals in Ghana who call family, friends and business associates in Nigeria pay more compared to calls to the United States of America, China, and Canada.

Whereas the telecommunication companies charge between GHp0.21 to GHc0.96 every minute for calls to Nigeria, they charge comparatively lower [between GHp0.12 to GHc0.21] for calls to the aforementioned countries.

The telecommunications companies also charge an average of GHp0.1620 per minute for calls to China and Canada.

This is according to data published by the National Communications Authority (NCA).

For calls to Nigeria, MTN according to the report charges the highest of GHp0.96, followed by Tigo, Airtel, Vodafone, Glo and Expresso in descending order.

On the flip side, MTN charges the lowest tariff from calls placed to the USA and China followed by Glo, Airtel, Vodafone, Tigo and Expresso with GHpp0.21 in descending order.

Comparatively, it is expensive placing calls to the United Kingdom and Italy from Ghana.

The local telecommunication companies charge a GHc1.40 per minute to UK and Italy as against countries like South Africa, Germany and UAE.

Below is the data published by the NCA: 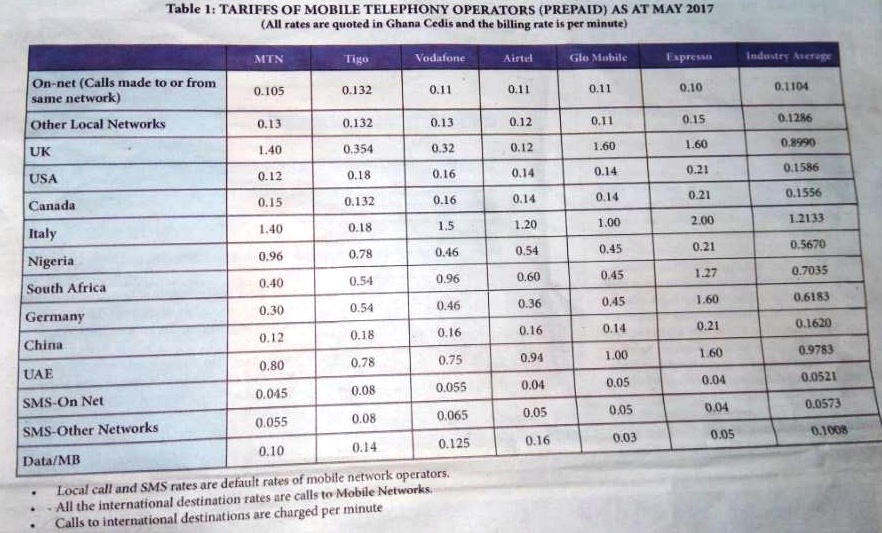 Swearng in of new BoG board