How SSNIT lost its shares in UMB [Report]

Citi News can confirm that SSNIT and SIC Life’s shareholding in UMB has been diluted by 50% following what appears to be their lack of understanding of the transaction they entered into with Fortiz in the takeover of the erstwhile troubled Merchant Bank.

Prior to the troubles of the hitherto wholly state owned Merchant Bank, SSNIT controlled an 89.6% stake with the remaining 10.4% belonging to SIC Life.

SSNIT and SIC Life sold 90% of the bank to fortiz, with the expectation that they could claw back more shares when a plan by the special purpose vehicle, the Merban Assets Recovery Trust (MART) succeeds in recovering more than 30% of the bank’s bad or impaired loans.

The new majority owners of the bank, however opted for a cause of action which resulted in increasing their grip in UMB and effectively reducing the state owned entities’ shares from 10% to a mere 5% jointly.

It is recalled that following debt troubles in 2013, Merchant bank was acquired by Fortiz, a Private Equity Fund.

Fortiz paid GH¢90 million for a majority stake in the bank with the understanding that an additional injection of GHS 50 million would be injected within a six month period.

The amount gave them a controlling stake of 90 per cent in the bank, leaving the minority 10 per cent to the country’s pensions fund manager, SSNIT and SIC Life Limited.

But after an initial payment of GHS 10 million to UMB as equity capital by Fortiz, it entered into an unsecured, subordinated debt instrument facility, referred to as a convertible loan with the bank, through which an additional  GHS 40 was invested into UMB.

Soon after it was concluded, the loan was converted into equity, in accordance with the Term sheet as approved by the AGM.

Unhappy with the turn of events, SSNIT and SIC Life took Fortiz and UMB to arbitration, in January 2017 claiming among other things that it was not right for Fortiz to use the means it did to acquire more shares in the bank.

The arbitration panel however roundly rejected the claims by the two, stating “even if the deal struck by the claimants does not appear to be very favourable to them, that deal is what has to be enforced.”

The tribunal explained further that the money paid by Fortiz to acquire shares in UMB could have been paid to SSNIT & SIC Life, “But this was not the option chosen….Rather, they agreed to use this consideration paid by the First Respondent (Fortiz) to increase the capital adequacy ratio of the bank.”

“This therefore  is the agreement that has to be enforced, even though its consequence was inevitably to dilute the shareholding of the claimants”

Citi News information reveals that the case put forward by the claimants gives the impression that they did not seem to appreciate sufficiently the extent of the consensual diminution of their interests in the bank.

What is baffling is how SSNIT and SIC life did not seem to know that the clause in the Share Sale and Purchase Agreement (SPSA) that they were relying on to claw back some shareholding, section 4.7 was illegal and in breach of the Companies Act, 1963.

Fortiz in their response to the claims by the two pointed out that the “Book debts and any recoveries mad were assets of UMB and could not be shared among its shareholders. Clause 4.7 of the SPSA was therefore contrary to law and therefore unenforceable.”

In a chastening arbitration award in June 2017 , the arbitration panel noted that the “there had not been sufficient or adequate preparation of the claimant’s case, adding that “the case presented to the tribunal differed in material parts from what has been pleaded.”

The panel chaired by eminent Ghanaian , Justice Date-Bah, with Prof Emeritus Albert K Fiadjoe and Felix Addo as Arbitrators, denied all the reliefs sought by the claimants and dismissed their claims in its entirety.

This latest development has brought to the fore more questions about the competence of the Management of SSNIT in the whole transaction, as Ghanaians come to terms with the $72 million OBS deal. 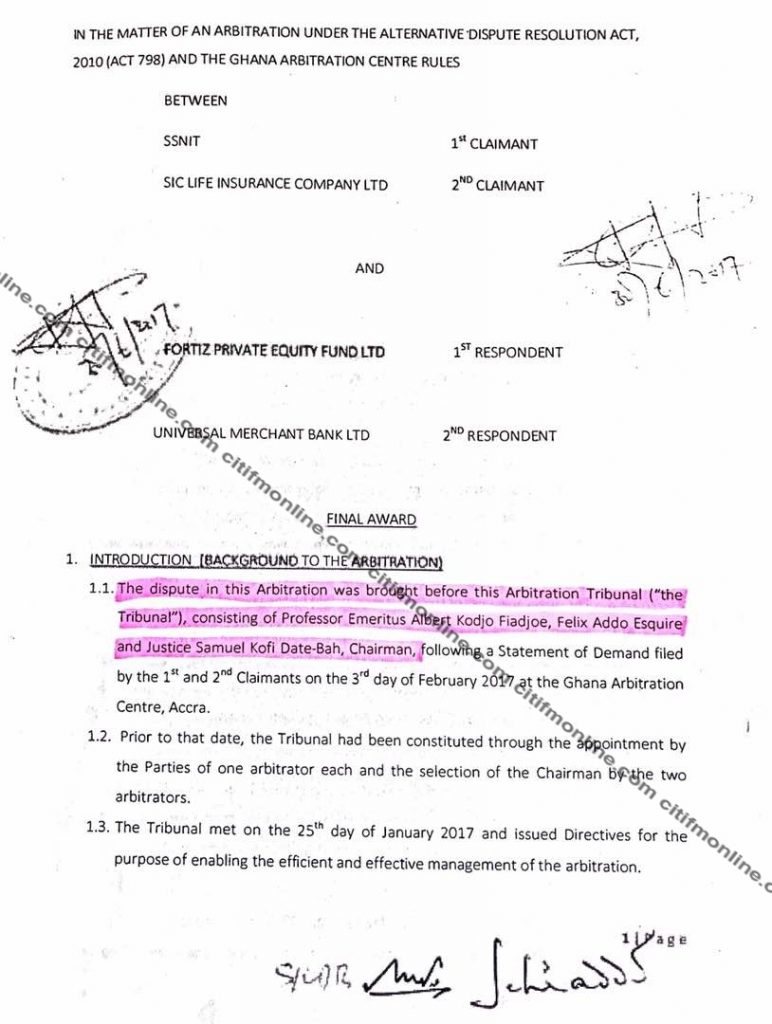 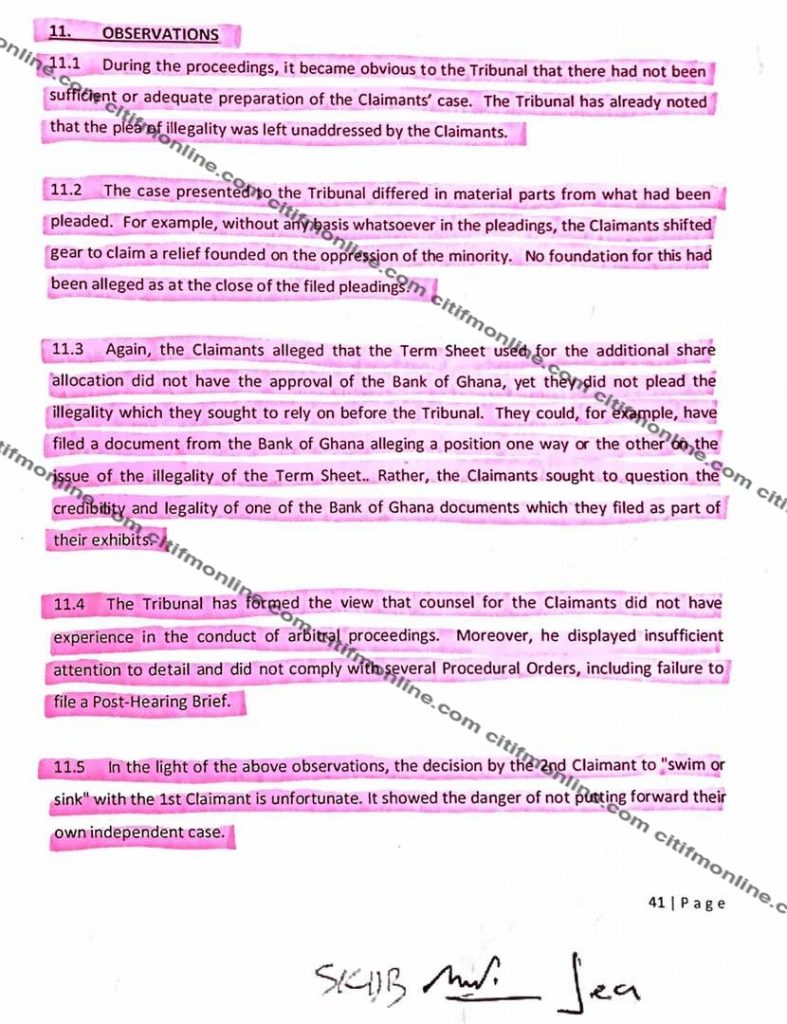 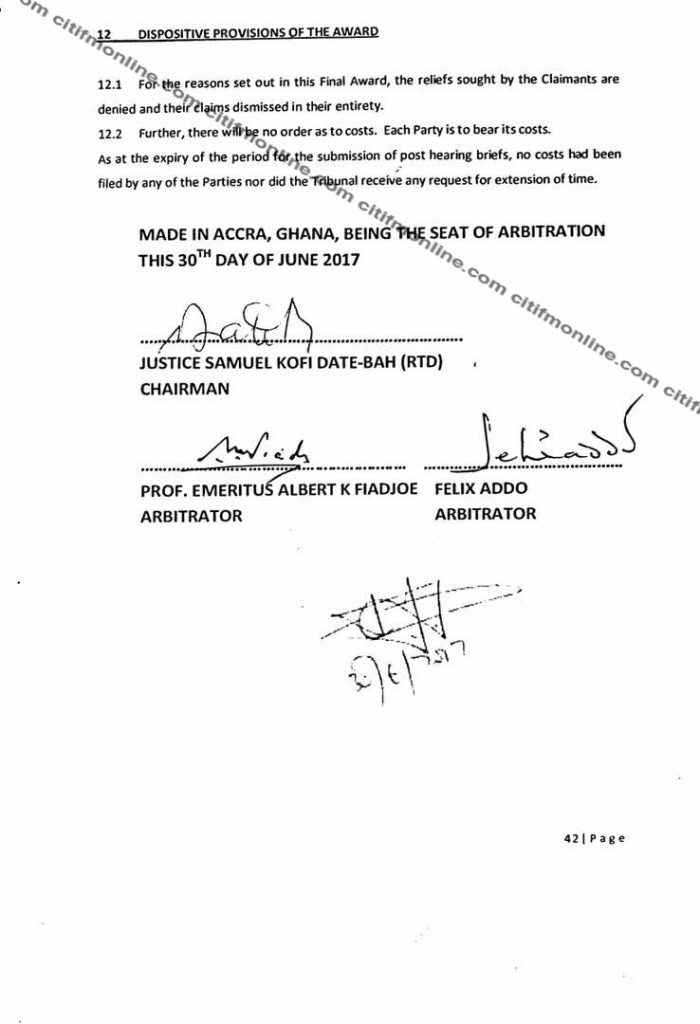