US President Donald Trump says he is “very disappointed” with China for not doing enough to stop North Korea’s weapons programme.

Writing on Twitter, he said he would not allow China to “do nothing” about the reclusive state.

His comments came a day after Pyongyang test-fired its second intercontinental ballistic missile (ICBM) in a month.

It later claimed the test proved that the entire US was within striking range of its weaponry.

On Saturday, two US B-1 bombers conducted exercises over the Korean peninsula with South Korean and Japanese planes.

The move was a “direct response” to the North’s two ICBM launches, and “part of the continuing demonstration of ironclad US commitment to our allies”, the US Pacific Command said. 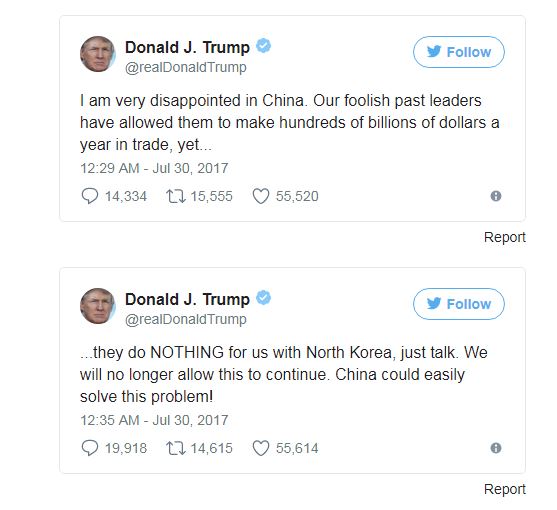 On Saturday, China condemned the test launch and urged restraint on all sides.

But Mr Trump voiced frustration at Beijing’s response, linking the US trade deficit with China with policy on North Korea.

“I am very disappointed in China. Our foolish past leaders have allowed them to make hundreds of billions of dollars a year in trade, yet they do NOTHING for us with North Korea, just talk,” he wrote in two consecutive tweets.

“We will no longer allow this to continue. China could easily solve this problem!”

China, which shares a land border with North Korea, is its closest economic ally and trading partner.

President Trump and his Chinese counterpart Xi Jinping discussed North Korea during talks earlier this year, after which US officials said the two countries were working on “a range of options” to rein in Pyongyang.

But since then the North has carried out two ICBM tests.

After Saturday’s launch, South Korea said it was concerned the North may have made “a significant advancement in technology”, adding that the missile test was “unique in its time and place of launch”.

Japanese Prime Minister Shinzo Abe said the threat to his country’s security was “grave and real”.

The North has repeatedly tested missiles in breach of UN resolutions.

Despite the ongoing tests, experts believe the North does not yet have the capability to miniaturise a nuclear warhead, fit it on to a long-range missile, and ensure it is protected until delivery to the target.

Others, however, believe that at the rate it is going, Pyongyang may overcome these challenges and develop a nuclear weapon within five to 10 years that could strike the US.