He made the announcement at a press conference on Wednesday morning, after visiting Mr Buhari at the London hospital where he is being treated for an unspecified illness.

Mr Osinbajo, now back in Nigeria, said he had discussed a wide range of issues during the hour-long meeting.

Mr Buhari has been in London since May.

The 74-year-old leader was elected to power in 2015, becoming the first Nigerian opposition leader to win an election.

It is his second period of medical leave in the UK, the first began in January and he returned home in March.

His long absence has led to speculation about whether he will be able to resume his presidential duties.

In his absence, President Buhari has given Vice-President Osinbajo full powers to act, in contrast to the situation in 2009, when the long illness of then President Umaru Yar’Adua led to a power vacuum. 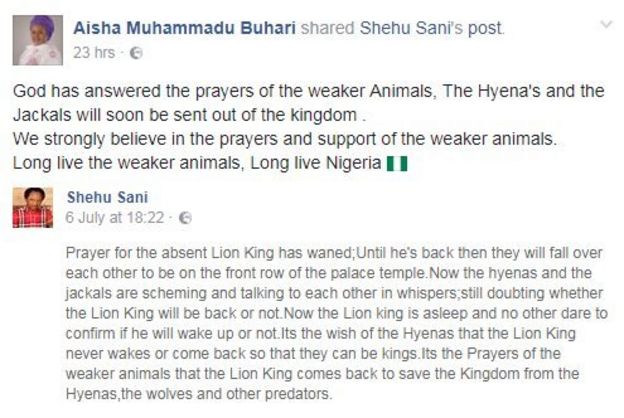 “Prayers for the absent Lion King has waned,” he wrote. “Now the hyenas and the jackals are scheming and talking to each other in whispers; still doubting whether the Lion King will be back or not.”

But Mrs Buhari appeared to calm any concerns – suggesting her husband, positioned as the defender of the “weaker animals”, was on the mend.

“God has answered the prayers of the weaker animals, the hyenas and jackals will soon be sent out the kingdom.”