Former President John Dramani Mahama has lashed out at US President, Donald Trump over his decision to opt out of the Paris climate agreement signed by his predecessor Barack Obama.

John Mahama in a series of tweets in reaction to America opting out on Thursday said, Donald Trump’s decision was from a “truly misinformed position”.

[contextly_sidebar id=”w9xi11rVoTHiRvVKQJxUtBfjqLFthAsi”]The Paris Agreement is to strengthen the global response to climate change by creating an international network of government bodies, all dedicated to lowering emissions.

All countries excluding Nicaragua and Syria signed the agreement.

Per the agreement, the worst polluters in the world would be made to pay for the pollution. The cost is estimated at $150 per tonne of carbon emission.

The aim is to improve the quality of air among other mitigating factors of climate effects.

The agreement contradicts Trump’s focus on industrial expansion which will see the US emit more carbon.

The US is currently the second highest emitter of carbon but its president, Donald Trump is on record to have said during his presidential campaign that climate change is a ‘hoax’.

Worried over the latest development on the US’ withdrawal from the deal, Mahama tweeted, “We all worked hard to reach the 2015 Paris Climate Change Agreement. US contributes 20% of CO2 pollution in the atmosphere. #ClimateAction”

“From Ghana, Former President JA Kufuor was one of the eminent coordinators at the COP21. #ClimateChangeIsReal”

“Sacrificing global interest to pander to a narrow domestic political base is eroding US leadership of the world. #ClimateAction” 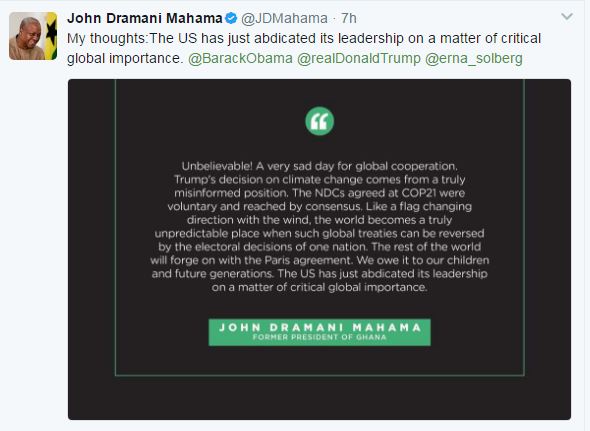 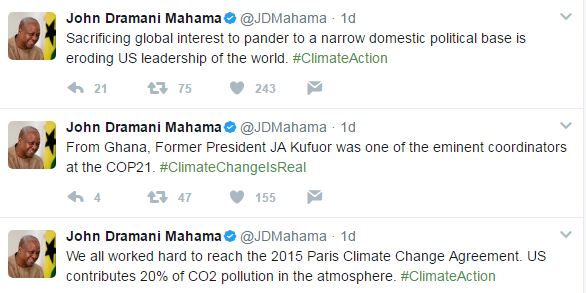 John Mahama who remained committed and conscious about the agreement while in government said the rest of the world will forge on with the agreement despite Trump’s decision of opt out.

He said, “Unbelievable! A very sad day for global cooperation. Trump’s decision on climate change comes from a truly uninformed position. The NDC’s agreed at COP21 were voluntary and reached by consensus. Like a flag of changing direction with the wind, the world becomes a truly unpredictable place when such global treaties can be reversed by the electoral decisions of one nation. The rest of the world will forge on with the Paris agreement. We owe it to our children and future generations. The US has just abdicated its leadership on a matter of critical global importance.”

Meanwhile, Trump has said his decision is in the interest of Americans. “I was elected by the citizens of Pittsburgh,” Trump said, “not Paris,” he said in his speech on the agreement Thursday.