Shares in Snapchat’s owner have sunk after it reported disappointing growth in the first three months of the year.

In its first results since floating, Snap said the number of daily active users rose just 5% to 166 million compared with the last three months of 2016.

That was two million fewer than expected, but 36% higher than the same period last year.

The news sent shares tumbling more than 20% in after-hours trading in New York.

Snap’s adjusted loss of $188.2m was about $10m higher than analysts had expected, while the net loss soared to $2.2bn from $104.6m due to costs associated with the IPO earlier this year.

Evan Spiegel, co-founder and chief executive, said on a conference call the company had been working on performance improvements and promoting its Android app, which could offer more growth globally compared with Apple’s iOS.

“We still have a lot of work to do, but we are excited by the amount of progress we have made in such a short time,” he said.

Asked if he feared Snap would be crushed by Facebook, Mr Spiegel replied: “You have to get comfortable with the fact that people are going to copy you if you make great stuff. Just because Yahoo has a search box, it doesn’t mean they’re Google.” 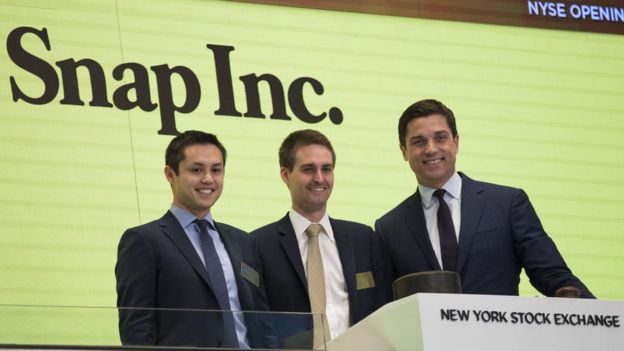 Many analysts remained sceptical of Snap’s long-term prospects. Ross Gerber of Gerber Kawasaki tweeted: “Snap user growth is almost zero. Losing $50 mil a month. This is so poorly run. Run and hide. This is worse than Twitter.”

Snapchat launched in 2012 as a mobile app that allows users to send photos that vanish within seconds.

On their first day of trading in New York in March, Snap shares closed 44% higher at $24.48, valuing the company at $28bn. The $3.4bn it raised made the float the richest US technology company listing since Facebook five years earlier.