“I gave him my shirt, to teach him that you’re not supposed to do that. I needed to set an example so he grows up to be nice”. This deep statement is not from Martin Luther King Jnr or Nelson Mandela, but from former Black Stars midfielder Sulley Ali Muntari, to one of the children who joined in the racial abuse against him.

On Sunday, Sulley Muntari, during a league match sort refuge in referee Daniele Minelli who was officiating his team Pescara’s game against Cagliari. Muntari complained to official about racist chants against him throughout the game but the referee surprisingly flashed his yellow card in Muntari’s face in response.

But that did not deter him, he walked off the pitch but did something profound in that protest. That was when he spoke to one of the young boys pouring racist chants on him; “”I gave him my shirt, to teach him that you’re not supposed to do that. I needed to set an example so he grows up to be nice”.

The midfielder was subsequently banned by the FIGC despite having enough time to take a considered and nuanced view of the situation. To make a terrible situation even worse, Cagliari got away without any punishment, because “an approximate number of only 10” fans were involved, which apparently isn’t enough to warrant sanctioning against the club.

This incident has attracted global condemnation including Ghanaian footballers, fans, Fifpro, the UN among others. Strangely, the Ghana Football Association (GFA) and the Confederation of African Football (CAF) are pretending they haven’t seen or heard. For me, their silence is as worse as the abuse itself, literally endorsing it. 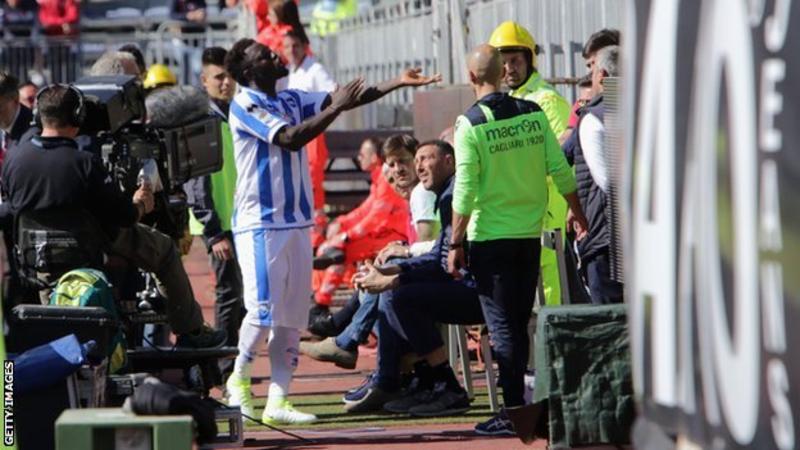 Forget CAF, why is the GFA silent on an issue of such magnitude involving one of its own? Sulley Muntari was one of the best performers of the senior national team the Black Stars, the flagship product of GFA in the last decade. He scored very important goals for the country, fought on the pitch for team and was a huge part of the glory in the 2006 and 2010 world cups. Forget the fact that he probably triggered the team’s disastrous outing in the 2014 edition which eventually turned the country against an FA Ghanaians are highly suspicious of.

But for a man who for all intents and purposes, did his bit for the nation, he does not deserve to be left in the cold especially when the racists jubilating over their barbaric act and whole world is talking about him. What does this say about how we treat national heroes? I respect the GFA president Kwesi Nyantakyi but I am highly disappointed that he has been so silent on this issue that has dominated every football website in the world. What kind of a leader is that? Even if he has something against Muntari, this is when he should have shown great leadership, but he has failed that test woefully.

Racism in football has mostly been against black players and CAF, the mother body of football in Africa, is still snoring, stuck deep in perpetual sleep especially when it comes to these matters. Even FIFA is supporting Muntari even though its own rules do not permit a player to walk off the pitch in regular time. How does CAF expect the people in Italy to support Africans when it has turned it’s back on him? CAF only pretends to care about racism in football when it’s time to hold the almost cosmetic FIFA ‘Kick Racism out Of Football’ flag during international tournament. I rest my case.

I was really proud to see former President John Mahama tweet in support of Muntari. Ghana as a nation always prides itself as the Black Star of African.
It’s no coincidence that the player taking a strong stand against racism is a Ghanaians, Sulley Muntari. Ironically the government of Ghana is yet to release a public statement to throw it’s weight behind it own son. Let’s pretend the press release is in the mythical political ‘pipeline.’ Muntari needs our support now more than ever.

If we are silent we are all endorsing racism, period!

A continent that is so timid to stand for what is right and a continent that forsakes its children in the midst of adversity. But we will all have to remember the famous words of Martin Luther King.

“Injustice anywhere is a threat to justice everywhere. We are caught in an inescapable network of mutuality, tied in a single garment of destiny. Whatever affects one directly, affects all indirectly.”