The government has released GHc 23 million for the completion of some Social Security and National Insurance Trust (SSNIT) residential facilities for personnel of the Ghana Armed Forces.

According to the Defense Minister, Dominic Nitiwul, some 5,000 soldiers do not have quality accommodation, which is one of the biggest challenges facing the Armed Forces.

Three contracts have also been awarded for the construction of three high-rise buildings, ahead of the broader improvement of the army barracks.

The government had previously reassured troops that all barracks across the country would be refurbished and renovated and that more residential accommodation facilities would be provided to reduce the acute accommodation problem facing troops.

Mr. Nitiwul made this known at the sod cutting ceremony of two six-unit housing blocks at the Southern Command Headquarters in Accra. 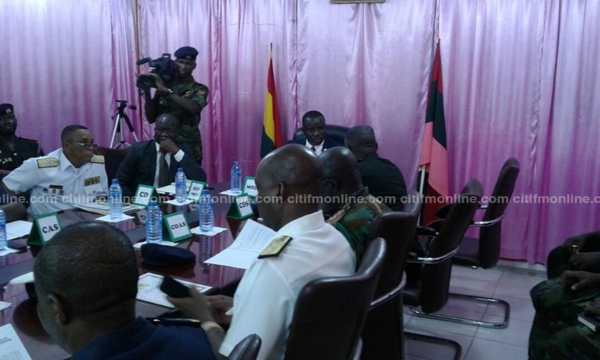 “Government has released GHc 23 million to complete the SSNIT buildings that have been there for the last 10 years. At the same time, the government has tasked me to, within the next three months, award projects for three high-rise buildings for a start and later on, they will roll out the real barracks regeneration project.”

Mr. Nitiwul expressed hope that others organisations will “adopt this kind of thing for us [the Army] whether they are banks, corporate bodies, GNPC or any other person so that gradually, we will be able to do something about it [the regeneration of the barracks].”

Lady murders father-in-law then takes selfie with his body