A powerful vehicle bomb has struck the diplomatic area of the Afghan capital, Kabul, killing at least 49 people and injuring 320.

The blast struck close to the German embassy in Zanbaq Square with civilians said to be the main casualties.

The wounded staggered from the site of a blast so strong it blew out windows and doors hundreds of metres away.

No group has yet said it carried out the bombing but the Taliban and IS have both been behind recent attacks.

When and where did the attack take place?

Makeshift ambulances carried wounded away from the scene as frantic relatives gathered at the cordoned-off perimeter of the blast site.

Images showed dozens of blackened and burned out cars.

Basir Mujahid a spokesman for Kabul police, told Reuters news agency the explosion had taken place to the German embassy but added it was “hard to say what the exact target is”.

Some reports say the bomb was in a lorry or water tanker.

Questions will surely be asked about how an attack could target such a heavily fortified area.

The zone is considered the safest in the capital, with 3m (10ft) high blast walls.

Who were the casualties?

Initial reports suggest civilians bore the brunt of the casualties.

The health ministry said the casualty figures were expected to rise further. 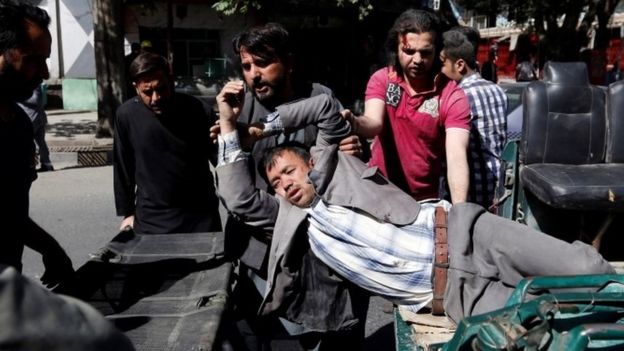 A German security source said it was unclear whether any of Germany’s embassy staff had been killed or injured.

French officials said the country’s embassy had been damaged but there were no signs at this stage of any French casualties.

India’s Foreign Minister Sushma Swaraj said the staff of its embassy, close to the blast, were safe.

A journalist for Afghanistan’s Tolo news agency said some of the victims were from the Roshan mobile phone company, but this has not been confirmed.

Who could have been behind the attack?

No group has yet said it carried out Wednesday’s attack, but last month the Taliban announced the start of a major spring offensive, saying their main focus would be foreign forces, targeting them with a mix of conventional, guerrilla, insider and suicide attacks.

A recent Taliban attack on an Afghan army training compound in the northern city of Mazar-e Sharif killed at least 135 soldiers, and led to the resignation of the defence minister and army chief of staff.

The so-called Islamic State in Afghanistan has also been active, saying it was behind a suicide bomb attack this month on a Nato convoy that was passing the US embassy in Kabul. At least eight civilians were killed.

Will Ghana get a factory in every district?