US warships deployed to Korean peninsula

The US military has ordered a navy strike group to move towards the Korean peninsula, amid growing concerns about North Korea’s missile programme.

The Carl Vinson Strike Group comprises an aircraft carrier and other warships.

US Pacific Command described the deployment – now heading towards the western Pacific – as a prudent measure to maintain readiness in the region.

President Trump has said the US is prepared to act alone to deal with the nuclear threat from North Korea.

“The number one threat in the region continues to be North Korea, due to its reckless, irresponsible and destabilising programme of missile tests and pursuit of a nuclear weapons capability,” US Pacific Command spokesman Dave Benham said. 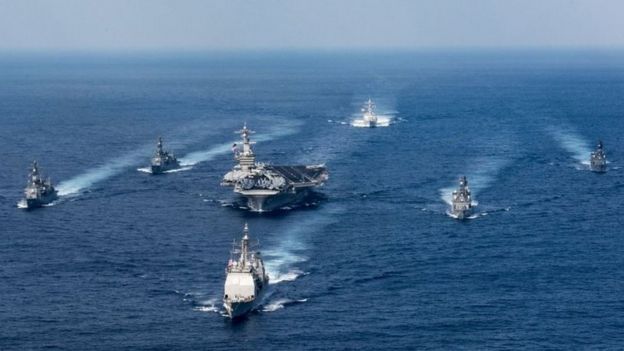 As well as massive striking power, the carrier group has the capability to intercept ballistic missiles.

It was originally due to make port calls in Australia but instead has been diverted from Singapore to the west Pacific – where it recently conducted exercises with the South Korean Navy.

North Korea has carried out several nuclear tests and experts predict more could be in the offing as the country moves closer towards developing a nuclear warhead with a big enough range to reach the US.

On Wednesday North Korea test-fired a medium-range ballistic missile from its eastern port of Sinpo into the Sea of Japan.

The test – condemned by Japan and South Korea – came on the eve of a visit by China’s President Xi Jinping to the US to meet President Donald Trump.

The two leaders discussed how to rein in North Korea’s nuclear and missile programmes as the US steps up the pressure on China, a historic ally of Pyongyang, to help reduce tension.

China has however been reluctant to isolate its neighbour, fearing its collapse could spawn a refugee crisis and bring the US military to its doorstep.

Mr Trump said in a recent interview that Washington was ready to act without Beijing’s co-operation: “If China is not going to solve North Korea, we will.”

The North is banned from any missile or nuclear tests by the UN, though it has repeatedly broken those sanctions.

Last month, North Korea fired four ballistic missiles towards the Sea of Japan from the Tongchang-ri region, near the border with China.

The US Treasury recently slapped sanctions on 11 North Korean business representatives and one company, while US politicians overwhelmingly backed a bill relisting the North as a state sponsor of terror.

North Korea responded by warning that it will retaliate if the international community steps up sanctions, saying the US was forcing the situation “to the brink of war”. 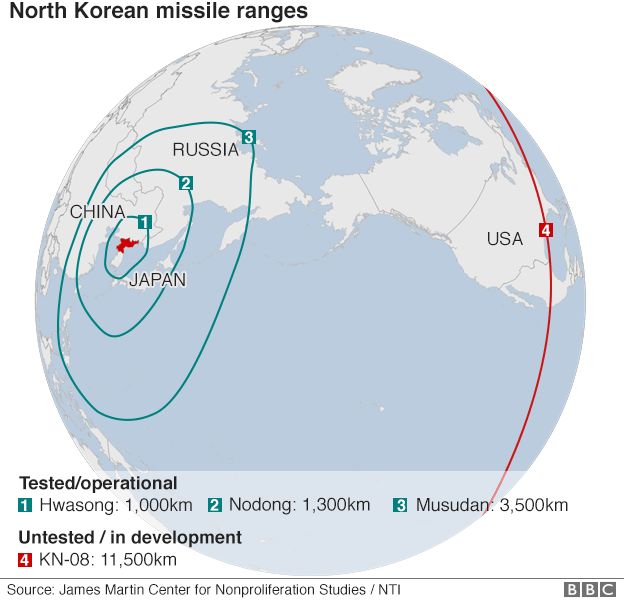 China has long been North Korea’s closest diplomatic ally and trading partner, but the relationship has become increasingly strained over Pyongyang’s refusal to halt nuclear and missile testing.

There are fears that Pyongyang could eventually develop the ability to launch long-range nuclear missiles capable of striking the mainland US.