Twitter forces US to drop demand for Trump critic’s details

The US government has dropped its request for the identity of an anti-Trump Twitter account, just a day after Twitter went to court over the issue.

@ALT_USCIS anonymously criticised President Trump’s immigration policy, and claimed to be run by employees at the United States Citizenship and Immigration Services.

US government officials issued a summons for identifying information.

But Twitter said that demand had been withdrawn after it filed a lawsuit.

The @ALT_USCIS account’s followers also ballooned from 38,000 to 158,000 during the lawsuit’s single-day lifespan.

The original summons from the US Customs and Border Protection (CBP) agency demanded “all records regarding the twitter account @ALT_USCIS to include, user names, account login, phone numbers, mailing addresses, and IP (computer) addresses”.

But the law cited by the agency – which is part of the Department of Homeland Security – is typically used to obtain records about imported goods.

The summons also demanded the information by 13 March 2017 – a day before the request was even sent to Twitter. 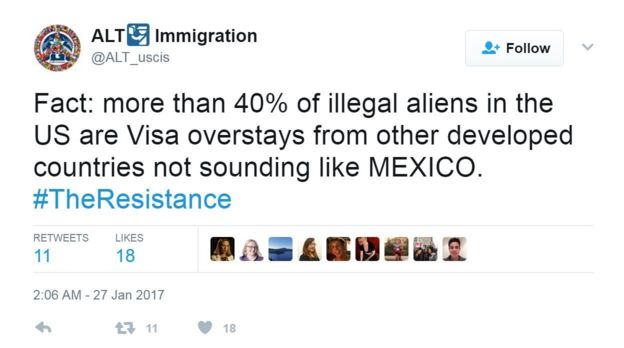 Twitter went to court in San Francisco to block the move, saying the CBP was “abusing a limited-purpose investigatory tool” and stifling freedom of speech.

The micro-blogging service was backed by the American Civil Liberties union (ACLU), which said it would join the court battle.

But the request was withdrawn by the government a day later, after Twitter’s court filing became public.

A justice department official told AFP news agency that the investigation had ended – but no details were given.

Many claimed to be controlled by current of former staff members.

Twitter said this is “a new and innovative class of American speakers” who need anonymity because they could face retaliation or lose their jobs.

“Permitting the CBP to pierce the pseudonym of the @ALT _UCCIS account would have a grave chilling effect on the speech of that account in particular and on the many other ‘alternative agency’ accounts that have been created to voice dissent to government policies”, it said.

On Mr Trump’s inauguration day, it tweeted a photo of the crowd, comparing it with the 2009 inauguration of then President Barack Obama.

The account was briefly shut down in response – reportedly because President Trump complained directly to the head of the National Parks Service.