More than 1.5billion mobile phones were sold in 2016, the highest ever in history in a particular year. This means more people are getting connected to their loved ones. However, majority of the devices could not last for long usage. This was majorly because of battery issues. This battery issue could be very annoying because you cannot tap enough juice from your phone.

Battery capacities are usually measured in Milliamps Hour (mAh). It is commonly used to measure the energy capacity of a battery. In general, the more the mAh, the longer the battery capacity or battery life.

Because of the challenge of batteries not lasting long, many OEMs have started producing bigger battery capacity batteries for their phones so that users can get much more from their phones.

However, there is also a dangerous trend among some OEMs who instead of producing bigger battery capacity are hoodwinking the unsuspecting customers by declaring a fake battery capacity when the real capacity is much lower.

Personally speaking, that is one of the most annoying things that can happen to a customer because I have been a victim of buying a fake battery for my phone.

The solution therefore lies in identifying and differentiating between an original and fake battery.

Last week, I did a personal investigation, trying to see which of the brands might be declaring a fake battery capacity. The investigation was done using 3 brands and I found a rather shocking fact. I collected three battery samples from itel Mobile, X-TIGI and Kimfly.

As you can see on the battery casing below, they all had their claimed battery capacity which are 1500mAh, 4000mAh and 2100mAh respectively. 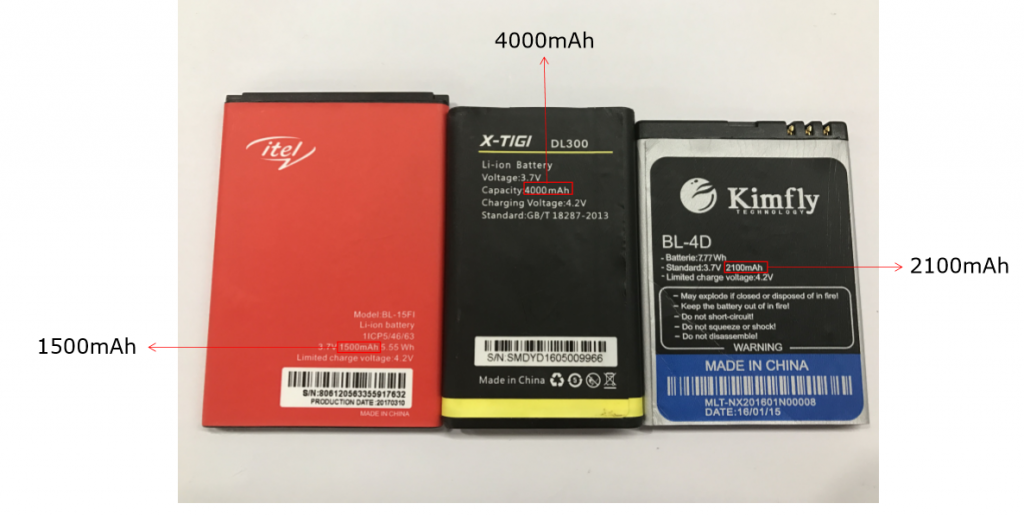 However, knowing full well from my many researches that the true battery capacities are always printed on the main battery case and not the battery paper, I ripped down the battery papers of the 3 aforementioned brands. The result was quite telling.

I found the true battery capacities for two of the brands to be different from what was printed on their battery papers.

While itel Mobile was true with their claim of 1500mAh, both X-TIGI and Kimfly were not. The real battery capacity of X-TIGTI and Kimfly were 1900mAH and 1000mAH respectively instead of their acclaimed 4100mAH and 2100mAH.

Having been a victim of fake battery before, I must say brands that mislead their customers and the general public should be sanctioned by the Standard Organisation of Nigeria (SON). How can someone buy a phone with a claimed battery capacity of 4100mAh, which ordinary should last over 24 hours only for the person to realise that the phone is just 1900mAh and cannot last for long?

I am not a fan of itel but I must commend itel mobile and all other brands who are honest with their claims about their battery capacity. It is better to tell the world that your phone is 2000mAh and it is true than for brands to say their phone is 5000mAh when the actual capacity is less than 2300mAh.

Below are some other tips to identify fake battery capacities from the real ones.

Tip 1: Rip down the battery paper. If no printed numbers are found on the battery, the phone is probably a fake one.

Tip 2: If you find the printed numbers after ripping down the battery paper, check the real battery capacity and compare it with the claimed and labeled capacity to identify whether the phone is genuine or fake.

Tip 3: Compare the battery weight or volume of two phones which labeled the same capacity. The one with less weight is probably a fake one.