In Ghana, virtually every part is opened for mining. As a result, 8 out of the 10 regions are currently grappling with the effects of illegal alluvial gold mining. Galamsey activities are on the rise, taking down the nation’s sources of drinking water.

But if you think the mining menace is happening only on land, you may want to reconsider your stands. Apart from fish from inland sources like River Ankobra and others becoming poisonous due to heavy metals in them, the oceans, which currently supply majority of the fish we consume is faced with “sea galamsey”.

[contextly_sidebar id=”F2LWajPsOwGvVL8YZlftSZiiUQzoUust”]As we speak, the entire coast from Keta in the Volta Region to Half Assini in the Western Region has been open up for oil exploration. Oil companies are crisscrossing the sea every time for oil, just as miners do.

But you know; Ghana has three oil fields. Each of them has 500 meter safety zone around its FPSOs. Truth is; these installations obstruct fishing activities no matter the explanation suggesting otherwise. Add that to the illegal, unregulated and unreported fishing practices by the fishermen themselves; and the fishing space is in turbulence.

While at that, between January and March this year, different oil companies are carrying out different activities that impede fishing in the western waters; particularly at different times. Tullow Oil started another seismic survey on 16th January, 2017, and ended on 16th March, 2017.

For 49 clear technical days that this activity was carried out within the 3 months period, fishermen who carry out their expedition in this part of the coast have had interrupted expeditions.

Whilst they were on it, four sea accidents were recorded where ships carrying the seismic surveys collided with innocent fishermen on their fishing expedition. The accident led to the loss of two canoes and other fishing gears.

Others were left on high seas for three days against their initial plan. Till date, two of the disputed cases are yet to be addressed.

Secondly, when the FPSO J.A. Kufuor by ENI was been anchored to its final destination in January, fishing activities were also hampered for 7 clear days.

As we speak, Springfield E&P, another Oil company, is also carrying out seismic surveys in the same western waters. They started on April 10th and will complete on May 7th.

No one is saying we shouldn’t prospect for oil. But, as we’ve messed up with gold, if similar is done offshore, where every area is permitted for prospecting, we will crush down the fisheries sector employing 10 percent of the population.

Again, this should scare you the more. There are four coastal regions in Ghana. Out of these, the Western Region produces one-third (1/3) of total fish catch in Ghana annually from its 197 landing sites. It is followed by the Greater Accra Region, Central Region then Volta Region.

However, the leading fish producing region; Western, is the region seeing increased search for oil. So where are we going? And what will become of the fishing space?

In 2016, the Fisheries Ministry projected that fishermen across the country will harvest a total of 329,358.42 metric tons of fish. However, by the end of December 2016, the fishermen could do 294,627.07 metric tons, a shortage of 34,731.35mt. Bear in mind that we are already importing some 1 million metric tons of fish already. So what are we doing to ourselves? 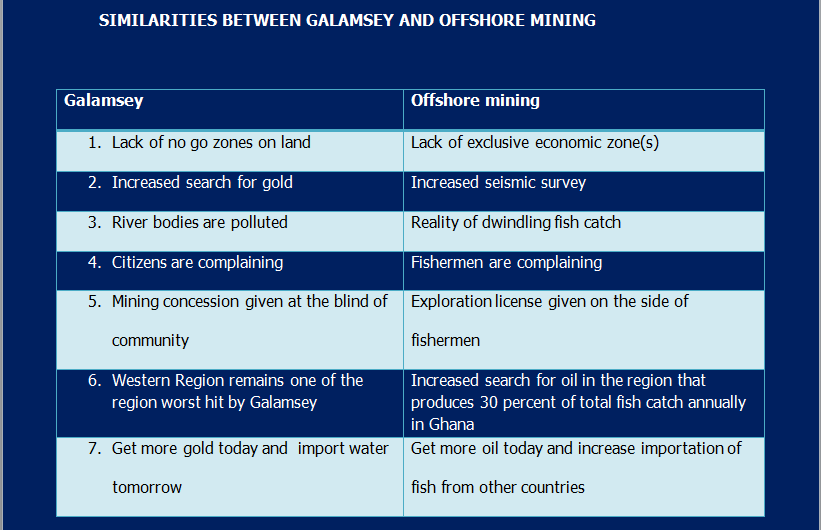 Problem with what is happening offshore is that, our government feels oil is important than those fishermen and the fish they get. Yes, but the number of people whose livelihood depend on this sector that we are gradually killing it is enormous. No one would want that to happen to its country. Oil cannot replace fish.

Other countries drilling oil have exclusive zones reserved for fishing. Friends of the Nation and Hen Mpoano, all NGOs in the western region have advocated for this exclusive zone, yet, 10 years down the line, the situation remains same. We are waiting till it gets to the levels of Galamsey before the media is called in. Our behaviour does not reflect a serious country. The tragedy of mining in Ghana is that, every part of the country is opened up for mining and it’s a problem with leadership, not the citizens.

So the question is: Why is leadership giving out all lands and rivers out for mining without recourse to tomorrow?

Maybe those of us at Citi FM and other media organisations, must be thinking of the next hashtag.
–
By: Obrempong Yaw Ampofo/Citifmonline.com/Ghana
[email protected]

AMA charged to stop dumping of feacal matter into sea