Obrempong Writes: The mystery of Takoradi’s Shopping Mall that never was!

The imaginary mall, when completed, was expected to employ some 2,000 workers, according to the initiators of the project. But the irony was that, the construction was to affect the livelihood of about 2,800 people operating on the land. To cut a long story short, the shopping mall never happened, at least after over 3 years, but the 2,800 were painfully evicted from the very land they had nurtured their business for years.

Some lost their lifetime assets. Others could not withstand the pain brought upon them. But till date, the site from where they were ejected is a “Jubilee Forest Reserve” sitting in the middle of Takoradi. 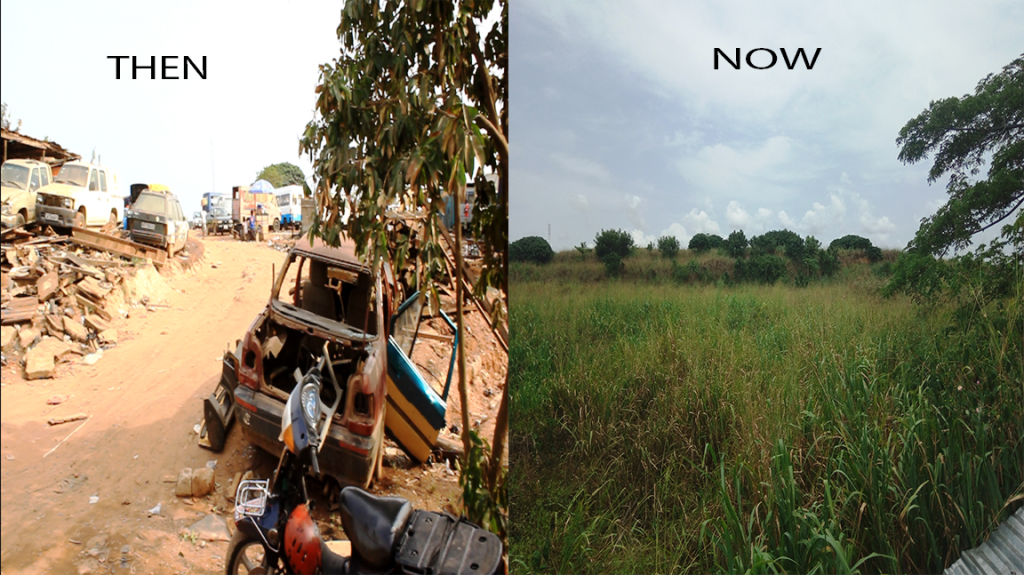 To understand how a fully occupied site for garages became a “forest reserve”, let go back into time.

Former president John Mahama had won the 2012 elections amidst controversy. The matter was sent to the Supreme Court. Whilst hearing of the case was ongoing in 2013, discussions were underway with the garage’s leadership for a possible relocation of some 2,800 estimated artisans at Tanokrom Kokompe, to make way for a proposed Takoradi Shopping Mall. 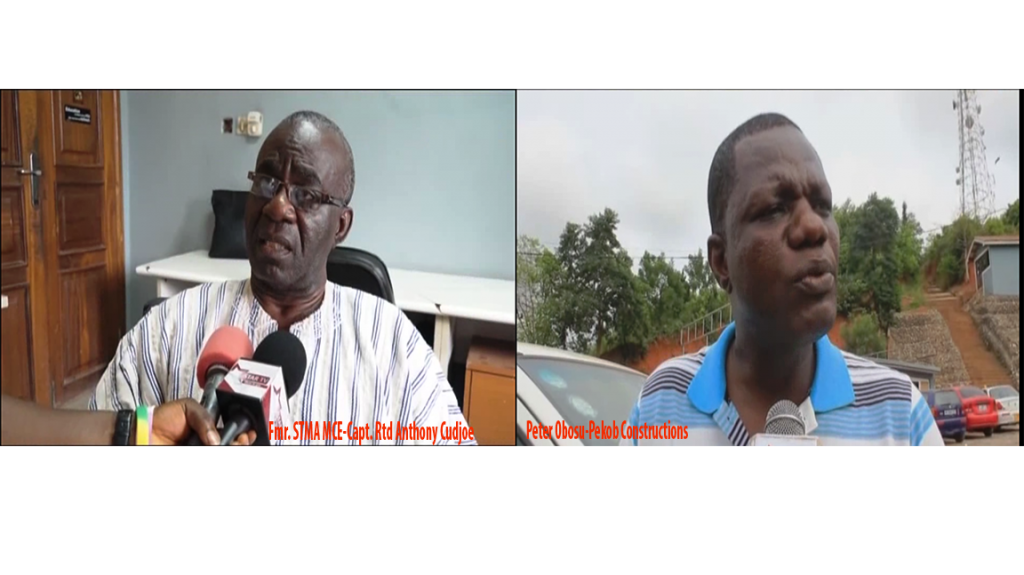 The characters involved in the negotiations, at least, as it was made to the public, were former MCE of the Sekondi-Takoradi Metropolitan Assembly Capt. Rtd Anthony Cudjoe, Peter Obosu of Peekob Constructions (Contractor of the mall), and Kwamina Kwadzie, Secretary of Garages. Later, representatives of Amnesty International came in. 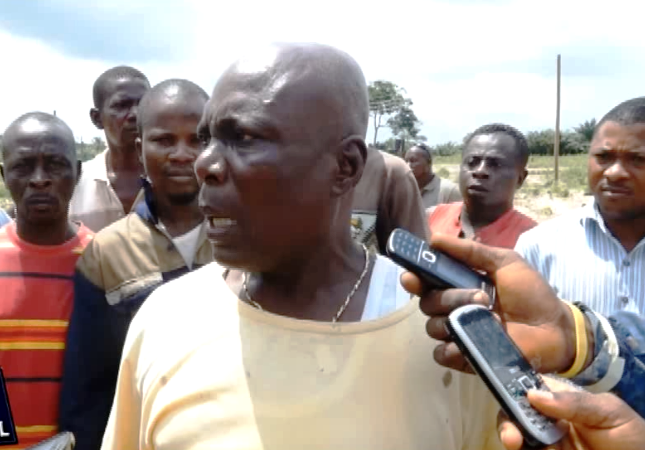 Supreme Court ruling on the 2012 election had been announced in August 29th, 2013. Investors could now heave a sigh of relief. Close door negotiations continued till January 2014. Sadly, negotiations hit a deadlock. The artisans had shown at every meeting that they were not going to leave the prime site behind the Takoradi Jubilee Grounds for the Shopping Mall to commence unless a new site fit for their operations is secured.

At about this time, the matter had left the circles of meeting rooms to the one that was fiercely debated on public radio. 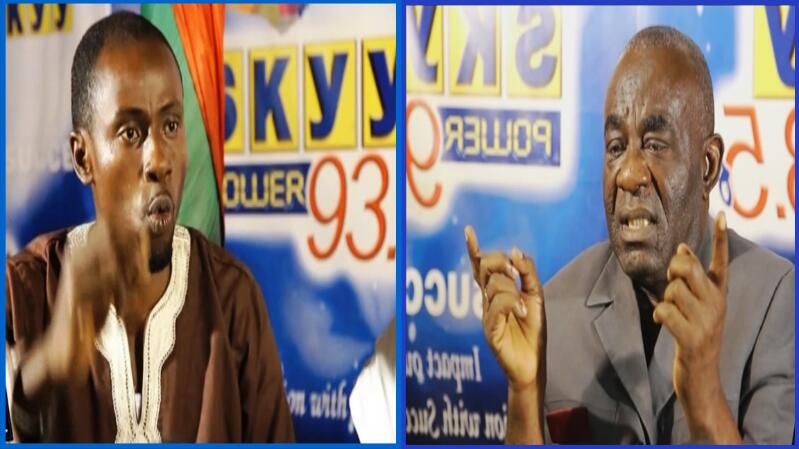 50 acres of plot couldn’t convince them

During backroom conversations, some 50 acres of land were secured by the Assembly and Peekob Constructions for the garages to occupy at Kansaworado Mampong, about 10 kilometers north of mainland Takoradi. The land was cleared; electricity and one public toilet were also provided. 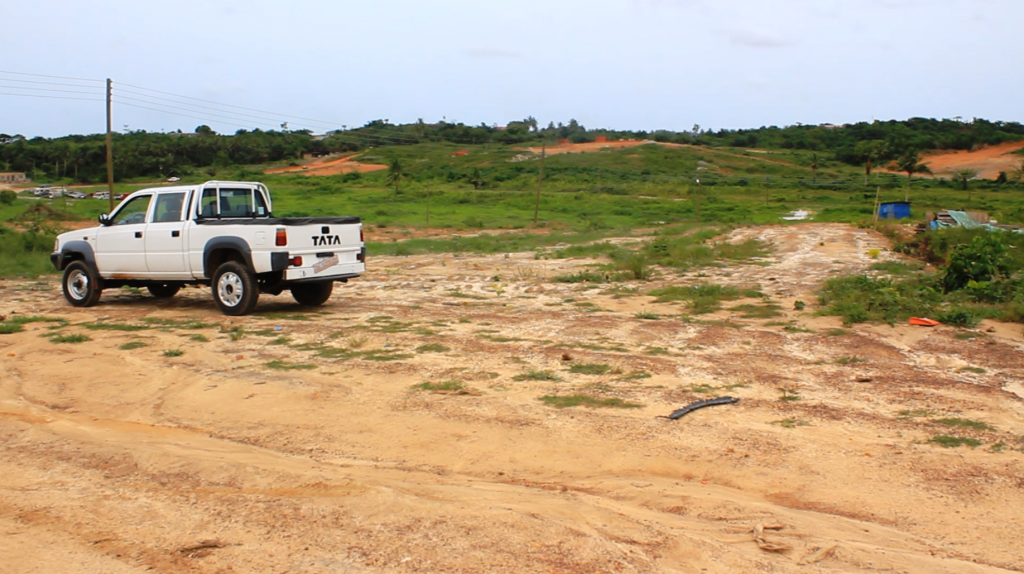 However, the artisans rejected the new site on grounds of the distance which could deprive them of customers, coupled with the dusty or slippery nature of the main road during rain or shine. 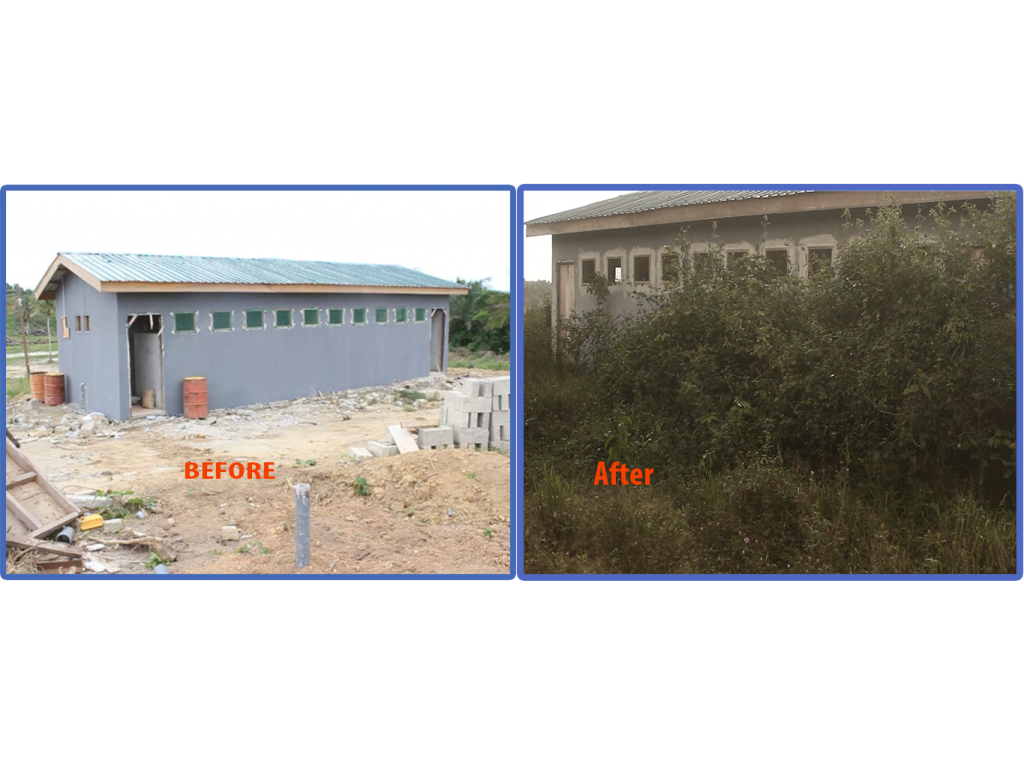 “Even if your car has no problem, the nature of the road will break it down if you visit the site”, Effia MP, Joseph Cudjoe [in whose constituency were the artisans] said.

The artisans also complained of security of their machinery, as the area was yet to be developed. They also had issues with the land because the Atuabo Gas Processing plant pipeline to Aboadze for power generation was passing through parts of the same land.

Controversy over ownership of the new site

What might have sealed the decision of the artisans not to relocate was the confusion over the ownership of the over 50 acres of land that they were to relocate to. One family told me in an interview in the heat of the debate that “the land belongs to the Agona Anona Family at Mampong. Any one [Referring to the artisans] who will dare go to occupy the land for their work, we have the right to stop them”. 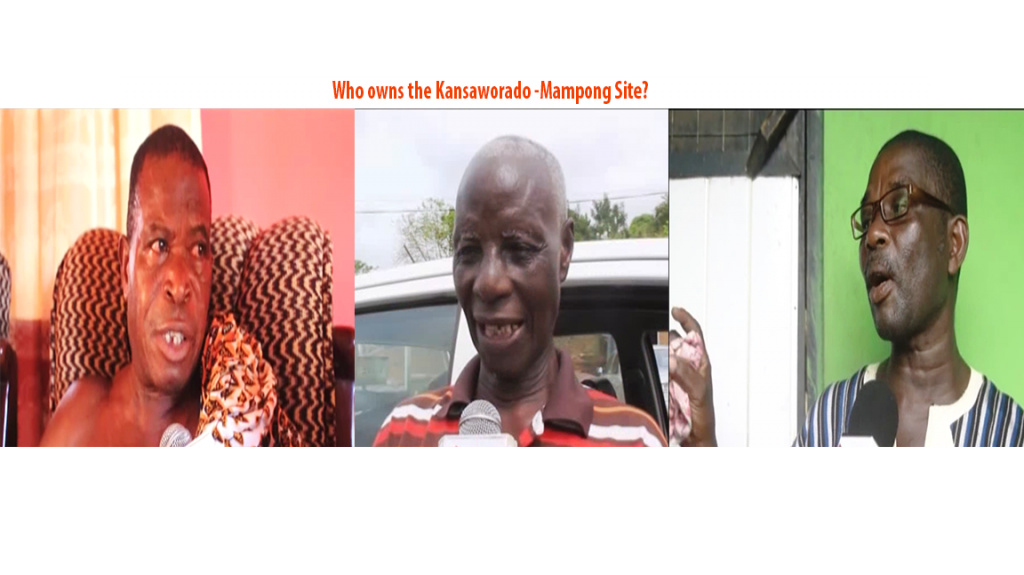 Another Family at Kansaworado; Sikaduase Eburaze, also stated in unequivocal terms that “the land on which the artisans are going to be sent belong to us”.

Whist at it, another family elder at Sekondi also mentioned in an interview on Skyy Power FM that “our portion of the land is 49.50 [acres], the greatest land!”

Before this brouhaha, the family Elder from Sekondi had said that “He [Peter Obosu – the contractor of the project] had spoken to us about his intent to acquire the land but he has not paid for it. Same day at same time at Skyy Power Fm, Mr. Obosu had said that “we had also paid half of it to the other side”. It was very confusing!

The controversy was gaining momentum. Not a single day passed without discussions of the matter on radio stations in the Sekondi-Takoradi.
News was finally served by the MCE, Capt. Rtd Anthony Cudjoe, that the Sekondi High Court has ordered him “to ensure vacant possession of the land” which the artisans had occupied for decades. The order meant that, if the artisans fail to relocate, some security forces had to be used to forcefully eject them. 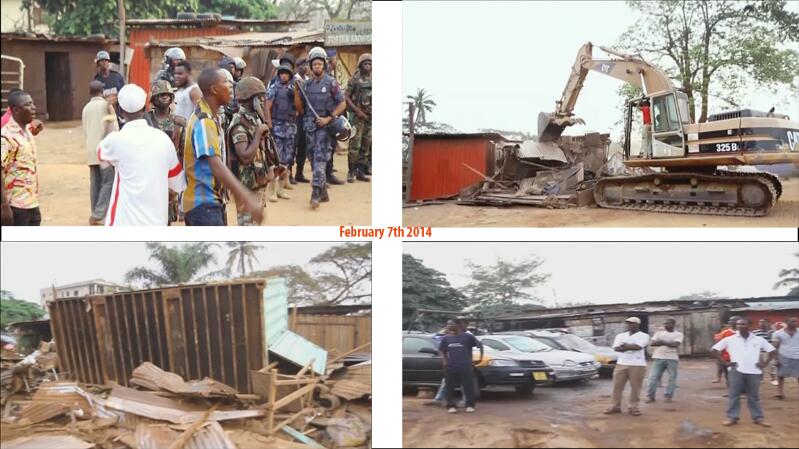 On that fateful 7th February 2014, you would have burst into tears if you were to see women weeping in their numbers when they looked helplessly whilst their investments were razed by excavators under the supervision of military and police force. 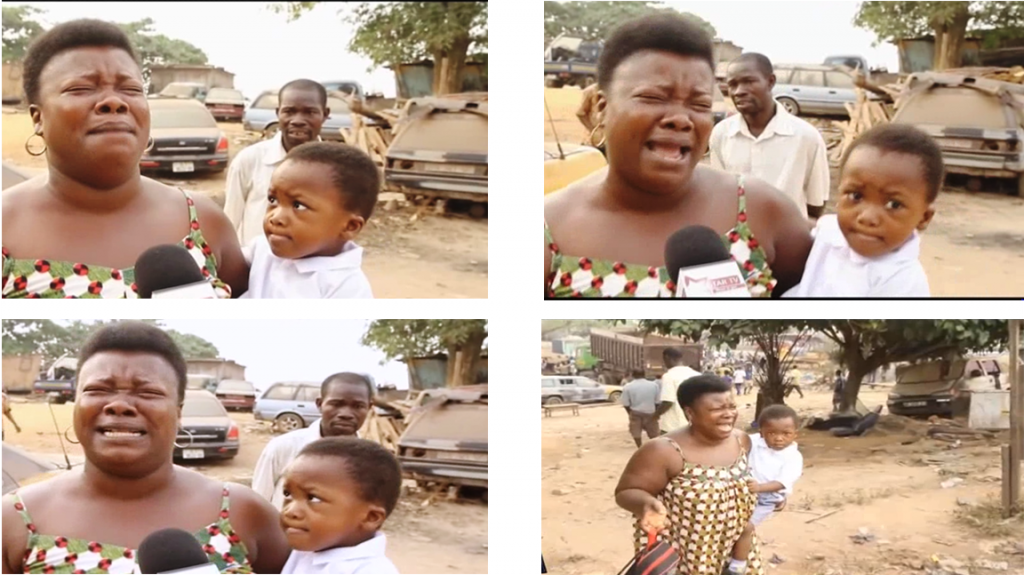 One woman who was crying out loud told journalists that “I give out male jeans and store shirts on credit to the artisans. I’ve gone for loan from Dream Financial Microfinance. I pay Gh48 daily. Now that the artisans have been dispersed, how can I locate them when this is the only area I know them? This is where I get my daily bread from. My husband is sick. As a result, I have become the head and tail of the house. I am dead already!” she lamented.

Others could not hold back their tears as they fell to the ground to wailing uncontrollably. 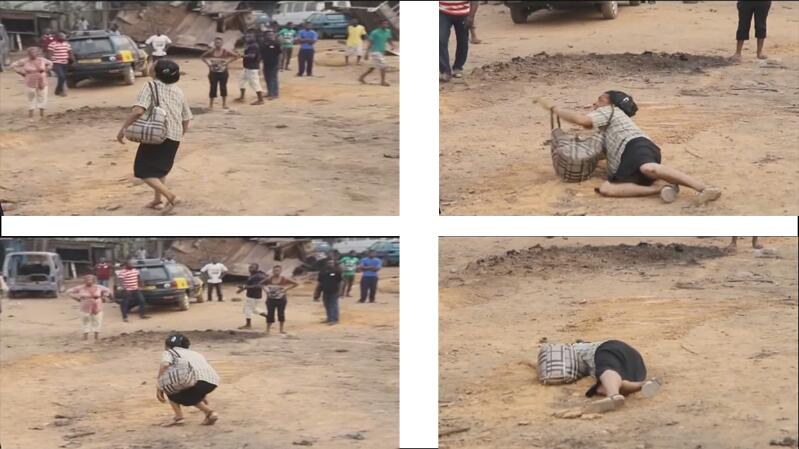 In the end, giant containers were overturned, and several vehicle parts were destroyed. Men became boys, and women run for cover. In all, over Gh50 million Ghana cedis worth of goods were estimated to have been taken down.

Leadership of the artisans, who had been taken by shock after failing to meet the assembly’s repatriation dates, staged a massive demonstration.

The demonstration was led by the spokesperson for the National Movement for Economic Democracy, Kweku Aboagye Boampong, Assembly Member for Asafo Electoral Area in Sekondi, Sampson K. Nimako, and a host of other personalities. 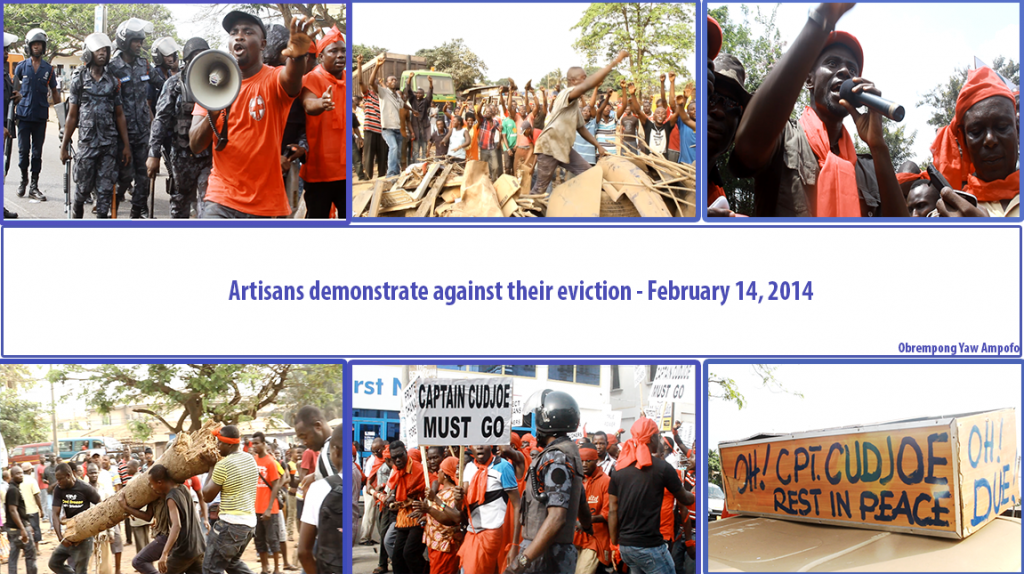 Clad in red and chanting war songs, the over 500 protesters marched from Takoradi Pipe Ano School Junction through to the Jubilee Park area. They were however stopped by over 20 armed police men from the Rapid Deployment Force.

Protesters had wanted to match through some principal streets of Takoradi. They were stopped by the police force. In the midst of the misunderstandings, tear gas was fired to disperse the charged crowd. Some police officers were captured on video brutalizing a female protester. 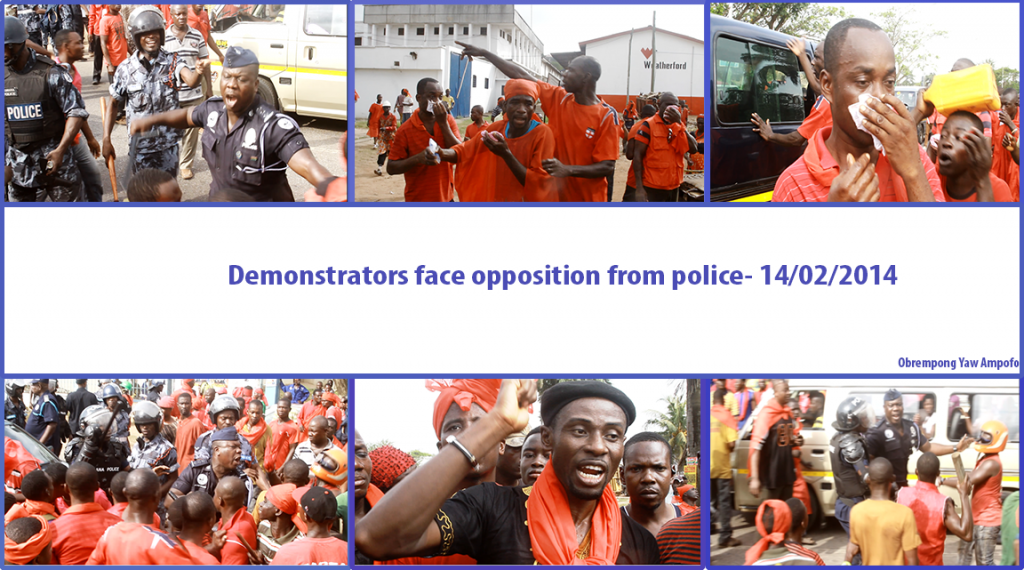 Eventually, their demonstration was thwarted. Eviction has finally been successful! But wait! Armed Forces and Civil Aviation had issues.

After the exit of the garages, reports also had it that, the Ghana Armed Forces base in Takoradi and the Ghana Aviation Authority, were allegedly kicking against the project on grounds that the mall, when constructed on the 21 acres of land, will impede air traffic due to the proximity of the land to landing flight path to the Takoradi Airport. 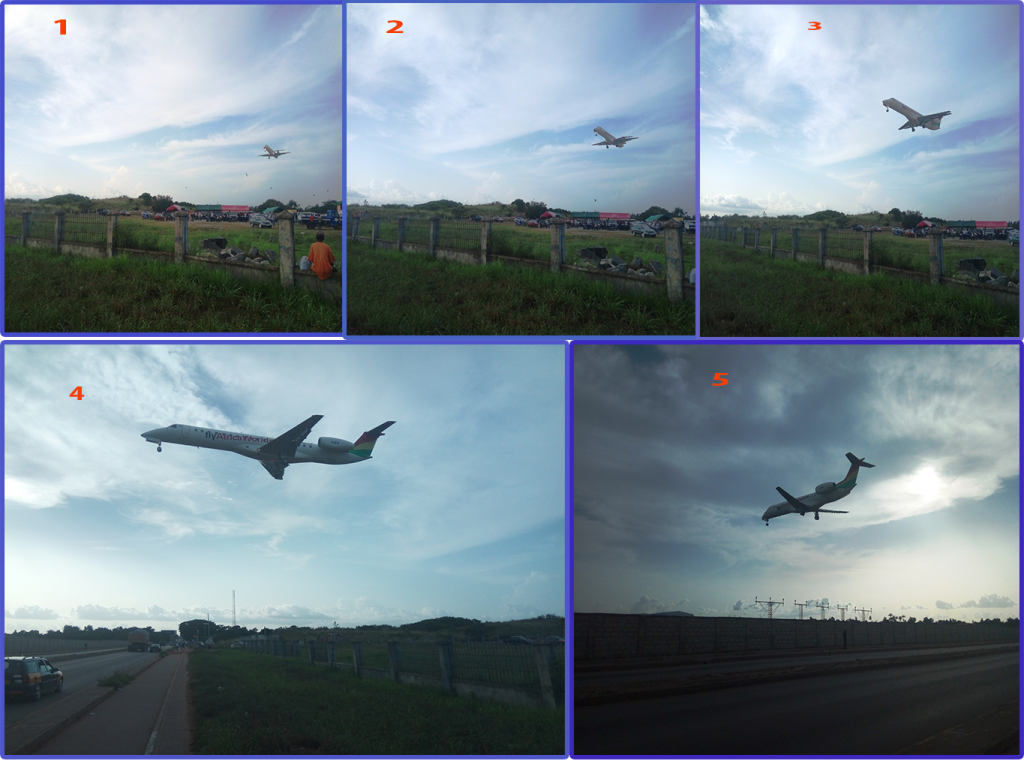 The Sekondi-Takoradi MCE, Capt. Rtd Anthony Cudjoe, and a pro NDC group; Sekondi Youth for Development, warned the Ghana Civil Aviation Authority and the Ghana Armed Forces that “your interest cannot impede the development of the mall.”

The people have been ejected. They also refused to go to the Kansaworado Mampong site. Some resorted to working at their backyards, others relocated to as far as Apimanim in the Ahanta West District. They were eventually dispersed.

The love and passion for the story on radio gradually faded away. The dust has settled. The 21 acres of land then occupied by the garages is empty and ready for the $65 million Takoradi Shopping Mall to commence.

Three years of no show

After all that happened, Peter Obosu, who spearheaded the eviction of the artisans, lost the contract. It eventually ended up in court. Project went to a new contractor called WBO, after some foreign investors were said to have partnered another Ghanaian in a consortium. 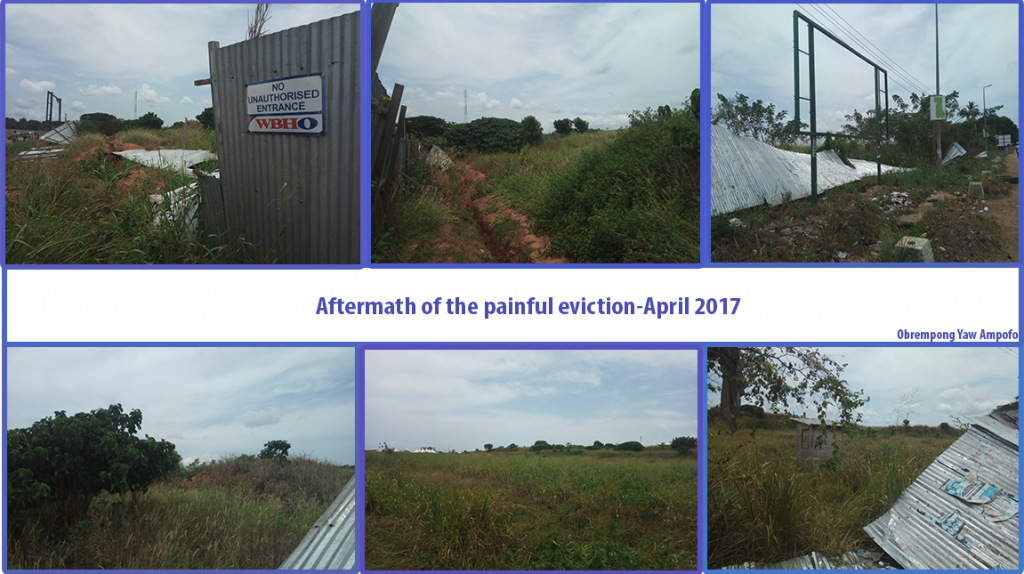 Today, the site, which once accommodated the garages for many years, has turned into a mini ‘forest’ overgrown with weeds. Some of the artisans are dead, others veered off their trade.

Women who sold to these artisans lost their businesses. Those who gave cloths and other items to some on credit could not trace their whereabouts after the crackdown. The Sekondi-Takoradi Metropolitan Assembly also lost the revenues it was generating from these artisans.
The remnants of the then vibrant Tanokrom Kokompe garage, brings back bad dreams to passers-by daily.

To the living evictees, the “forest” is a sad end to a once vibrant market.

To those who followed the eviction, the remnant of the then Tanokrom Kokompe is a tragedy of leadership and an endorsement of the survival of the fittest.

I pray that the Takoradi Shopping Mall comes off one day to wipe the tears of all silent wailers.
–
By: Obrempong Yaw Ampofo/citifmonline.com/Ghana
E-mail: [email protected]