Tension is mounting in the Mpohor District of the Western Region, as irate NPP supporters issue a stern caution to the leadership of the NPP in the region and President Nana Addo Dankwa Akufo-Addo, not to name any other person as District Chief Executive aside a former Constituency Chairman, George Bernard Eshun.

The supporters claim they are reliably informed that the President has settled on one Ignatius Assah Mensah for the position, whom they argue defeats ethnic fairness.

One protester, who claimed to be an executive of the party in the constituency, said “all the top constituency executives are from Fiase, the current chairman and many top members are all from the tribe of the Member of Parliament, Alex Agyekum. Why will they attempt to disqualify the only nominee from Mpohor?” 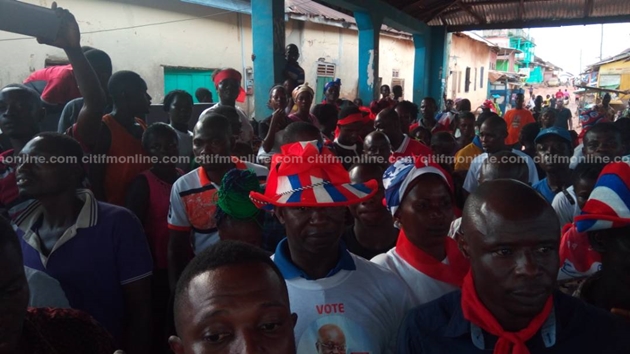 The charged supporters clad in red insist Mr. Bernard Eshun is the best person to fill the position.

Some personalities who were backing the protesters include the Mpohor NPP Youth Organizer, Mathew Ekow Assan, the representative of the Mpohor Omanhene, Nana Kofi Ampim, and the Mbrantsehene of Mpohor Abusuapanyin Kweku Amoako among others.

Meanwhile, in a list of 212 people released by the Minister of Local Government today [Wednesday], President Akufo-Addo indeed named  Ignatius Assah Mensah as the DCE for Mpohor.

It is unclear the next line of action the protesters will take in expressing their displeasure.

Agitations over appointment of DCEs

There have also been agitations in parts of the country over the appointment of the MMDCEs.

Angry supporters of the New Patriotic Party (NPP) in the Bawku West Constituency of the Upper East Region on Tuesday evening vandalized their party office and some departmental offices in the Zebilla district, over the alleged appointment of one Victoria Ayamba as the District Chief Executive for the area.

The group said Patrick Ayamba, Assembly Member for Teshie, a suburb of Zebilla, and a businessman, is their best bet for the job and will resist any other appointment by President Akufo-Addo. At Elubu in the Jomoro Constituency of the Western Region, some youth of the area were on the heels of the MP claiming he had deceived them after promising to ensure that their preferred candidate gets nominated.

But the MP, Paul Essien denied making such a promise. “These things are just coming from just a few guys who are trying to throw something in the air and if there is evidence of a letter I have written against honourable Moses, they should produce it. I am not sure these things are real things. It is like people are just guessing,” he said on the Citi Breakfast Show on Wednesday.