The Ashanti Regional Police Command has arrested a notorious robber who has been on the police wanted list for a series of attacks on Chinese Mining sites at Manso Watreso and its surrounding areas.

Philip Kwadwo Danso, 28, was arrested along with 30-year-old Kwadwo Asamoah Daniel after the Obuasi Divisional Police Command on Sunday, April 23, 2017, received a complaint from some Chinese expatriates that they had been attacked and robbed by some five young men in military apparel, wielding a shotgun and two locally made pistols.

Following intelligence, police arrested the two on Monday, 24th April, at about 3:30pm at Krofrom, a suburb of Kumasi. 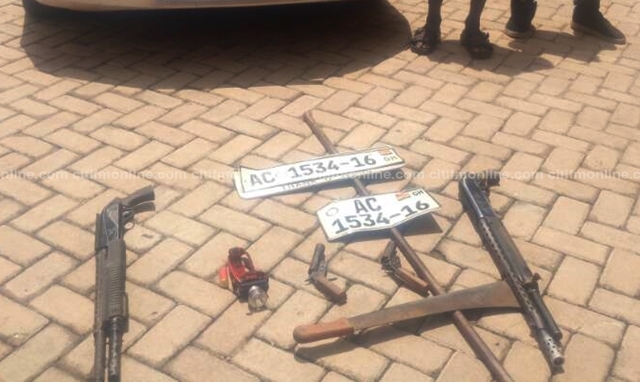 The Ashanti Regional Police Commander, DCOP Ken Yeboah, who briefed the press said the robbers “made away with their (Chinese expatriates) grey Hyundai Accord with registration number AC 1534-16, 10 mobile phones, two laptops, a pump action gun and an amount of GHc3000.”

They were found in possession of the stolen Ash Hyundai Accord Saloon car affixed with a new number plate, DV3536-17.

DCOP Ken Yeboah said, “the two suspects during interrogation, mentioned one Kwaku Asare, aged 30, as an accomplice who was later arrested at Sofoline a suburb of Kumasi.”

Both suspects also led the police to a bush, where they (suspects) had kept the original number plate of the car.

Kwaku Asare, “in the course of the operation tried to escape from the Police, but was shot in the process and died instantly, the body has since been deposited at the Komfo Anokye Teaching Hospital.”

The Commander appealed to the general public to assist the police “with any information to get the three other suspects mentioned in the robbery, arrested.”

Meanwhile, the two suspects are in custody, as investigations continue.