Nana Addo thanks Owusu Bempah for his ‘spiritual help’

President Akufo Addo has expressed gratitude to the founder and General overseer of the Glorious Word Power Ministries International, Prophet Isaac Owusu Bempah, for the ‘spiritual’ role he played in ensuring the New Patriotic Party’s (NPP) victory in the 2016 December polls.

Prophet Isaac Owusu Bempah was one of the Christian leaders who prophesied that then candidate Nana-Addo was going to emerge victorious in the keenly contested elections.

Speaking at the Head quarters of the Glorious Word Power Ministries at Odorkor, President Akufo Addo said he contested the 2016 elections against powers and principalities, but was quick to add that Prophet Owusu Bempah’s spiritual intervention ensured his victory.

“I am to happy to be here. I should have been here earlier, but God ordained it for me to come at this time. You should know it was God who made me come here at this time as the President of Ghana…  It is important that we fervently pray for the change we are desiring. I know one of the religious leaders who will champion this cause of change is Rev Owusu Bempah.” 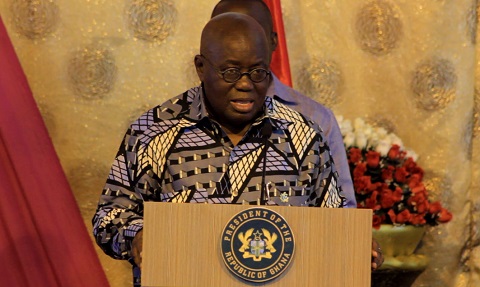 I fought against powers and principalities

President Akufo-Addo stated that, he fought  against powers and principalities to emerge victorious in the 2016 elections. According to him, in spite of the enormous spiritual battles against his bid, he always knew that the battle was the Lord’s.

” We went to the polls about three months ago.We fought against powers and principalities, but in all of this, I had the firm belief that the battle was the Lord’s.”

He visited the church to thank the prophet and urge him to continue praying for him and his Ministers to succeed.

However after this development, the Prophet told host of TV show- Restoration, Stacy Amoateng in 2015, that Ghanaians will give Nana Addo an opportunity to lead the country for the first time, though there might be some challenges.

Nana Addo off to Geneva for Africa CEO Forum