Facebook has been criticised for its handling of reports about sexualised images of children on its platform.

The chairman of the Commons media committee, Damian Collins, said he had “grave doubts” about the effectiveness of its content moderation systems.

Mr Collins’ comments come after the BBC reported dozens of photos to Facebook, but more than 80% were not removed.

They included images from groups where users were discussing swapping what appeared to be child abuse material.

When provided with examples of the images, Facebook reported the BBC journalists involved to the police and cancelled plans for an interview.

It subsequently issued a statement: “It is against the law for anyone to distribute images of child exploitation.”

Mr Collins said it was extraordinary that the BBC had been reported to the authorities when it was trying to “help clean up the network”. 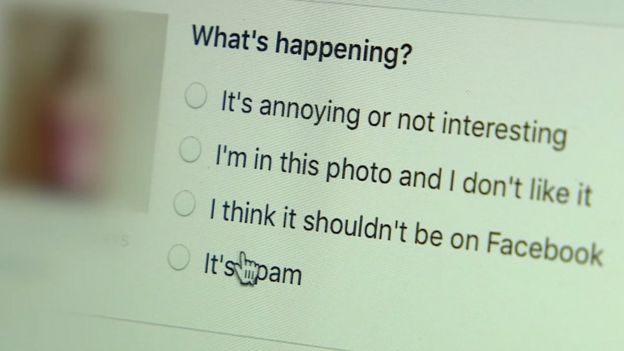 On its welcome page, Facebook says it does remove obscene material.

“Nudity or other sexually suggestive content” it states are not allowed on the platform.

It encourages users to report inappropriate content via its “report button”.

The US firm says it has improved this system since an investigation by the BBC last year.

That found “secret” groups were being used by paedophiles to meet and swap images.

Information the BBC provided to the police led to one man being sent to prison for four years.

To test Facebook’s claim, the BBC used the report button to alert the company to 100 images which appeared to break its guidelines. They included:

According to Facebook’s automated replies, the other 82 did not breach “community standards”. They included the apparent freeze frame.

But the BBC found five convicted paedophiles with profiles, and reported them to Facebook via its own system. None of them were taken down.

“I find it very disturbing, I find that content unacceptable,” said Mr Collins in response.

“I think it raises the question of how can users make effective complaints to Facebook about content that is disturbing, shouldn’t be on the site, and have confidence that that will be acted upon.”

The BBC also showed what it had found to Anne Longfield, the Children’s Commissioner for England.

“I have been very disturbed by what I have seen, very disappointed that one year on we are still seeing images that are very sexualised, totally in my view unacceptable,” she said.

“The moderation clearly isn’t being effective, I would question whether humans are moderating this, are looking at this, and also I think it is failing to take account of the context of these images.” 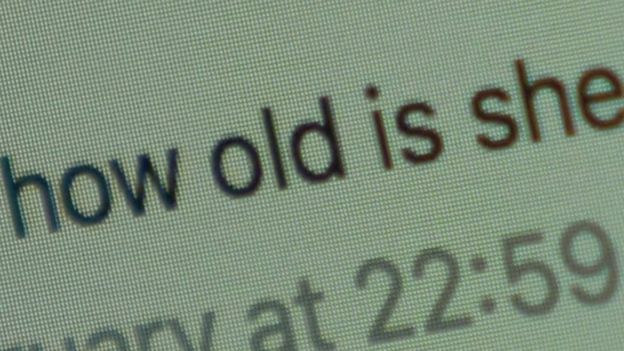 The National Society for the Prevention of Cruelty to Children (NSPCC) also voiced concern.

“Facebook’s failure to remove illegal content from its website is appalling and violates the agreements they have in place to protect children,” said a spokeswoman.

“It also raises the question of what content they consider to be inappropriate and dangerous to children.”

The BBC first asked Facebook for an interview about its moderation system in late-2015, and repeated the request following this follow-up investigation.

The social network’s director of policy Simon Milner agreed to be interviewed last week, on condition the BBC provided examples of the material that it had reported, but had not been removed by moderators.

The BBC did so, but was reported to the UK’s National Crime Agency as a consequence.

Mr Collins said this was “extraordinary – because you’re trying to help them clean up their network, from material that shouldn’t be there”.

“We have carefully reviewed the content referred to us and have now removed all items that were illegal or against our standards,” it said.

“This content is no longer on our platform. We take this matter extremely seriously and we continue to improve our reporting and take-down measures.

“It is against the law for anyone to distribute images of child exploitation.

“When the BBC sent us such images we followed our industry’s standard practice and reported them to Ceop [Child Exploitation & Online Protection Centre].

“We also reported the child exploitation images that had been shared on our own platform. This matter is now in the hands of the authorities.”

But the BBC’s director of editorial policy, David Jordan, said the move was surprising.

“The fact that Facebook sent images that had been sent to them, that appear on their site, for their response about how Facebook deals with inappropriate images…the fact that they sent those on to the police seemed to me to be extraordinary,” he said.

“One can only assume that the Facebook executives were unwilling or certainly reluctant to engage in an interview or a debate about why these images are available on the Facebook site.”

A spokesman for the National Crime Agency said he could not confirm or deny an investigation was underway.