His victory ends Mr. Hayatou’s 29-year reign as president of the Confederation of African Football. 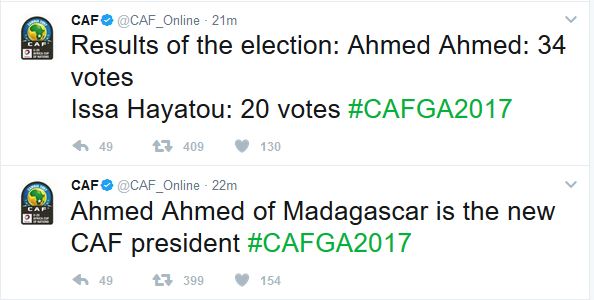 Issa Hayatou, who has been in office since 1988 was hoping to remain in office for his eighth term.

The departure of Hayatou is a huge change for African football and the 70-year-old will also lose his Fifa position and his place on the ruling council of world football’s governing body.

Ahmad told BBC Sport after his victory that: “I can’t talk at this time. Only one thing – I thank God, I thank my team… we worked hard but we won. That was the first step. The second step is to develop African football. Some days I thought I would win – today I didn’t (think I would win). When you try to do something, you mean that you can do it. If I can’t do it, I never stand. This is sweet victory. When you work hard for years and months and you succeed, that is great.”

Ahmed has said that his first task will be to introduce a new code of ethics that will effectively check stakeholders in football on the continent.

He has also promised to modernise the body and make it more transparent.

Exploding letter ‘injures one’ at IMF office in Paris