The Chief of Kpikpira in Tempane in the Upper East Region, Naba Dazuur II, has complained about what he calls incessant extortion of monies from residents of the area by immigration officers at the Wedana border, when they attempt crossing the border for social events in neighbouring Togo.

According to the chief, the practice is dehumanizing and must be stopped, as he called on authorities of the service to intervene and stop the illegal practice.

According to him, Bimoba people are divided by national borders, and as such allowed them to cross borders for social activities; but the unprofessional conduct by immigration officers often threatens  their rights to free movement and association. 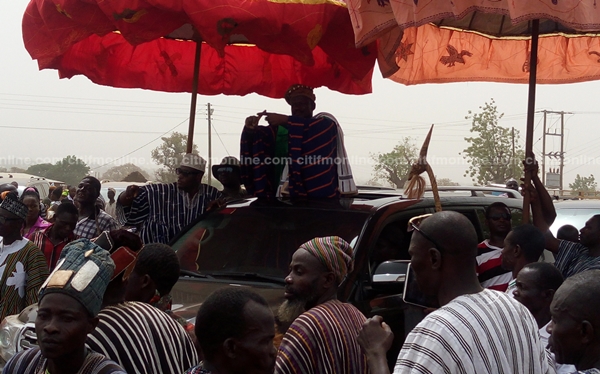 He appealed to the Upper East Regional Minister, Rockson Bukari, to intervene by ensuring that the officers put a stop to the practice.

“Bimoba people are divided by national borders. we are torn between Ghana, Burkina Faso and Togo. Yet these artificial borders have not separated our way of lives. we interact together in several ways such as funerals, markets, farming and many other social functions. The Immigration officers are harassing my people and extorting monies from them. I have received several complaints from my brothers across the borders to that end. I recalled when my own brother was stopped and asked to pay some money.”

“I appeal to you Regional Minister Rockson Bukari, to help address this issue of the immigration people and their actions. My people cannot be paying money to attend funerals and other functions, so impress on them to do their job with diligence and professionalism.”

For his part, the Upper East Regional Minister, Rockson Bukari, promised to call the recalcitrant immigration officers to order.