After successfully organizing four events; the fifth crowdfunding dinner is set to be bigger and a lot more exciting. Accra SOUP has grown in popularity since its maiden edition in August 2015 and has become a must-attend for young people that want to make a difference in their communities. 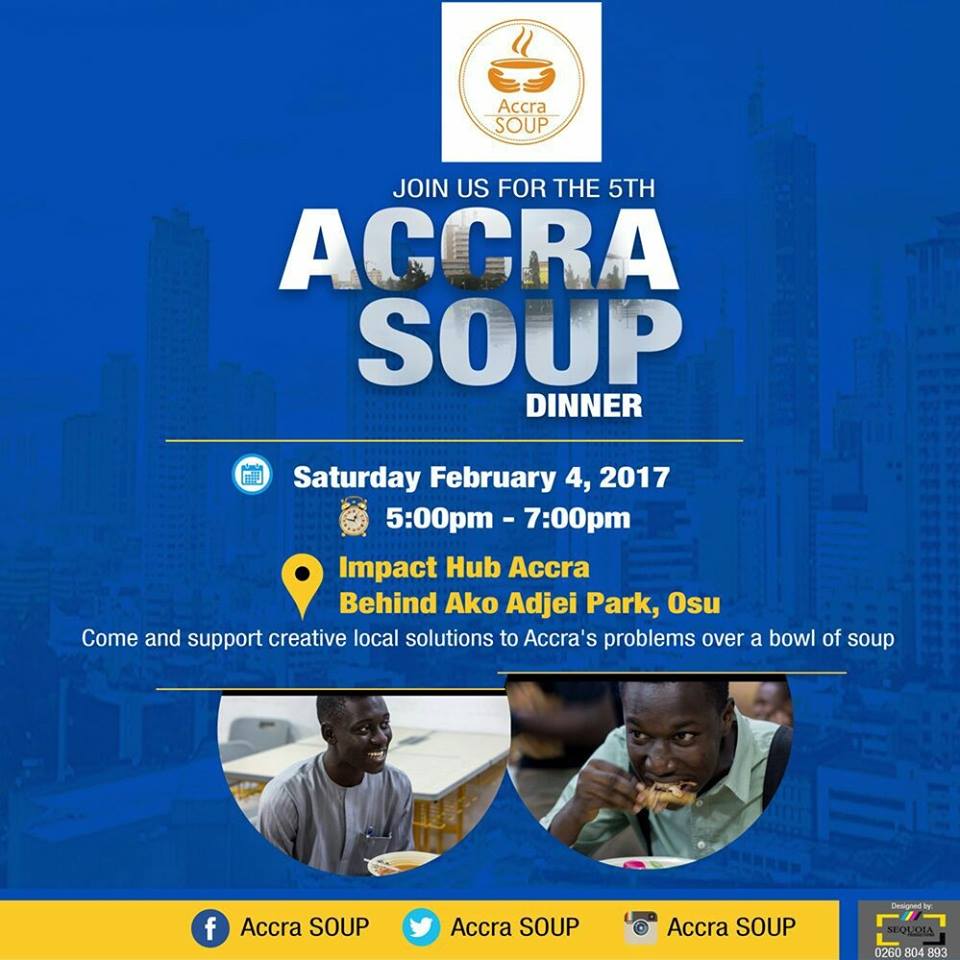 If you are wondering what Accra SOUP is all about; it is a really simple concept. People turn up to the dinner, make a minimum donation of 10cedis at the door (those who can are encouraged to donate more) and that entitles them to a bowl of soup plus a vote! Yes, a VOTE!

But what are they voting for?

Attendees listen to four people pitch an idea to improve any problem they have identified in Accra. Pitchers cannot talk for more than four minutes and cannot use PowerPoint. The audience are then allowed to ask the pitchers questions about their problem-solving ideas.

The ideas that are presented range from art, urban agriculture, social justice, social work, education, technology and many more. It can be about any brilliant idea that can solve a problem or enhance life in Accra.

After the presentations and questions, delicious soup (light soup) is served; Ghana style. The audience is encouraged to come along with their own foods as well to add to it and share with others; i.e. Potluck style. But this is optional. Attendees socialise with each other and ask the pitchers some more questions over a bowl of SOUP.

Then the audience cast ballots for the idea they liked the most. The votes and the money collected at the door are counted. The idea with the most votes gets to take home all the donations taken at the door and use it to fund their plan, with a public pledge to come back in three months (at the next dinner) to give a report on how they used the money.

There have been four dinners so far; in August and November 2015 and February and July 2016. Some of the projects that have been pitched include

The Blind Can Lead (a film that aims to dispel misconceptions about blind people),

Our four winners have been Action Accra, Kids and Maths, Read Camp and The Blind Can Lead. So, the people of Accra identify problems and ways to solve them, then the people collectively contribute to fund the solution to these problems.

We have helped raise a total of about 1,500 cedis for four small social projects in Accra to benefit local communities.

Accra SOUP is the local response to the global SOUP movement started in Detroit, Michigan. Today, similar events are organized in cities across the world including Vancouver, London, Edinburgh, Sheffield, Leeds and Sydney.

HFC Bank rewards customers on 13th month of the year