US President Donald Trump has invited India’s Prime Minister Narendra Modi to visit the United States after a phone call between the two leaders.

Washington said Mr Trump saw India as a “true friend and partner in addressing challenges around the world”.

“The two discussed opportunities to strengthen the partnership between the US and India in broad areas such as the economy and defence,” it said. 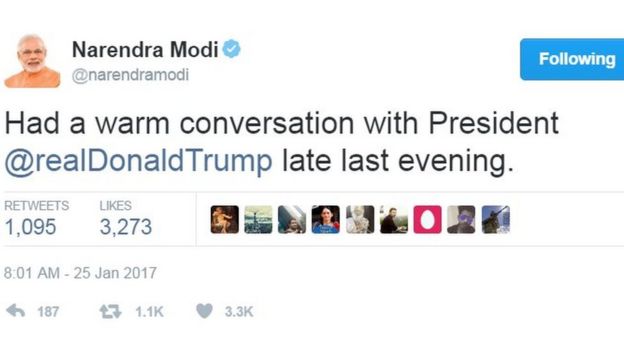 The US statement added that Mr Trump and Mr Modi resolved to “stand shoulder to shoulder in the global fight against terrorism”.

Mr Modi had congratulated Trump after his election win in November, saying he appreciated his “friendship” with India.

During the US election campaign, Mr Trump wooed Indian-American voters and was largely positive about India.

Six key statements Kwaku Agyemang-Manu made at his vetting [Infographic]