‘My residence’ was approved as my retirement package – Mahama

Former President John Dramani Mahama has explained that his decision to maintain the state residence he occupied while in office, contrary to recommendations made by a committee he set up to review emoluments of Article 71 office holders and his retirement package, was approved by the new government and Parliament.

A statement from the office of John Mahama said, the “decision and agreement on the place of residence and office for the former President was formally communicated to the new administration by the former Chief of Staff Julius Debrah on December 19, 2016.” 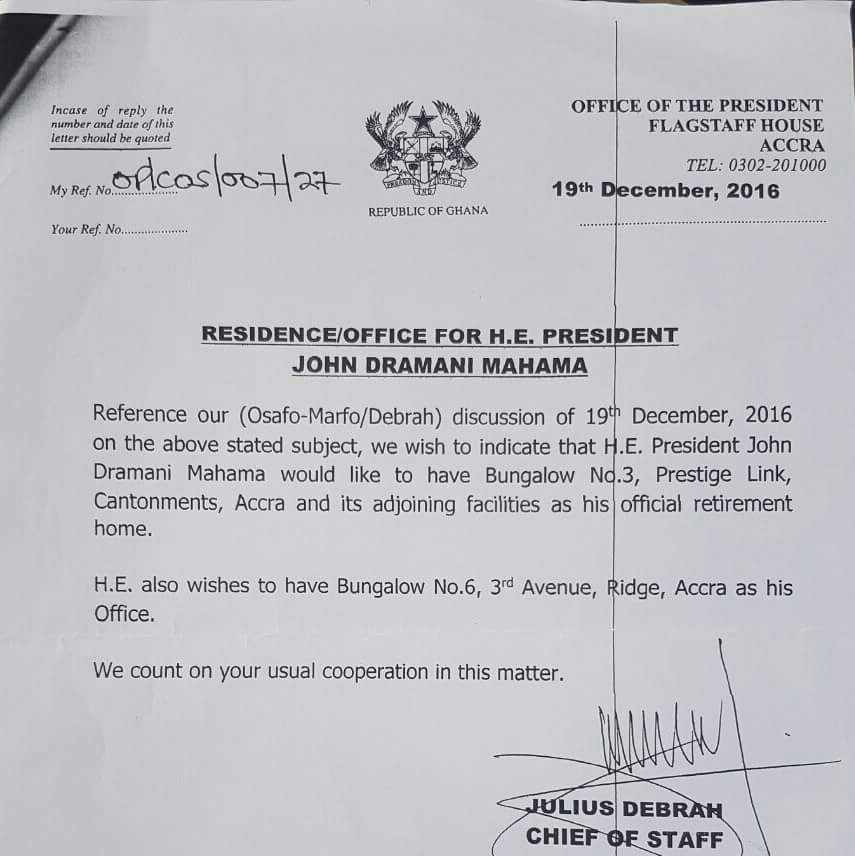 The statement also noted that, Parliament approved of the new development.

The Prof. Dora Francisca Edu- Buandoh committee’s report sighted by citifmonline.com, recommended that John Mahama should retire on a salary of GH¢22,809, up from the non-taxable salary of GH¢15,972 previously approved for presidents.

Instead of going home with a fully furnished house in Accra and another location of his choice outside the capital, the committee recommended Mr. Mahama should rather receive “40 percent of [his] salary to be paid monthly.”

John Mahama’s successor, President Nana Akufo-Addo, took over the administration of Ghana over the weekend.

There were reports that Vice President Dr. Mahamudu Bawumia was stranded, since his residence is being occupied by John Mahama.

But Mr. Mahama in the statement rejected the said claims and described it as “mischievous.”

According to him, the Vice President is expected to take up residence in the House known as Australia House, which was previously occupied by former Vice President Kwesi Bekoe Amissah-Arthur.

“An Official and Permanent residence for the Vice President is currently under construction, off the Switchback road. Dr. Bawumia will move into the new structure when completed.”

According to the report, the outgoing President, while on retirement should receive benefits such as state-provided staff not exceeding four (4), and a furnished and up-to-date office and communication equipment, and staff support consisting of a cook, steward and gardener.

In the area of security, “the state will provide two security persons to be chosen by the former President from state security. Two vehicles for security.”