More than $11m (£8.8m) is missing from The Gambia’s state coffers following the departure of long-time leader Yahya Jammeh, an adviser to President Adama Barrow has said.

Luxury cars and other items were seen being loaded on to a Chadian cargo plane on the night Mr Jammeh left the country. 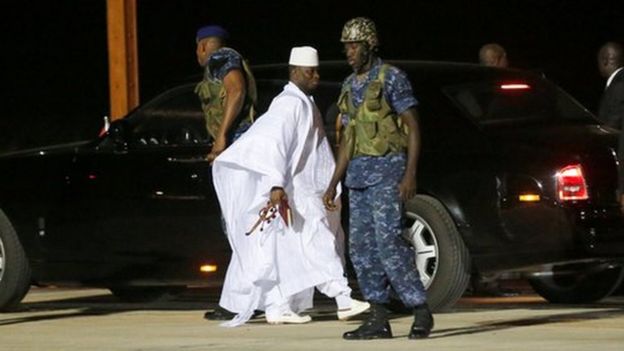 Mr Jammeh flew into exile on Saturday, ending his 22 years in power.

He had refused to accept election results but finally left after mediation by regional leaders and the threat of military intervention.

President Barrow remains in neighbouring Senegal and it is not clear when he will return.

However, West African troops have entered the Gambian capital, Banjul, on Sunday to prepare for his arrival.

Cheering crowds gathered outside the State House to watch soldiers secure the building.

The Senegalese general leading the joint force from five African nations said they were controlling “strategic points to ensure the safety of the population and facilitate… Mr Barrow’s assumption of his role”.

Mr Fatty told reporters in the Senegalese capital Dakar that The Gambia was in financial distress.

“The coffers are virtually empty,” he said. “It has been confirmed by technicians in the ministry of finance and the Central Bank of the Gambia.” 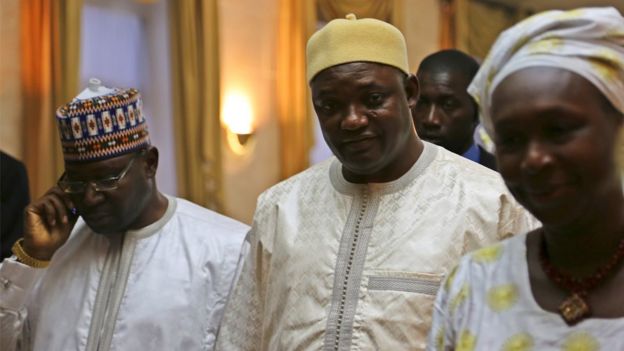 He said Mr Jammeh had made off with more than $11m in the past two weeks alone. The BBC is unable to independently verify the claims.

Mr Fatty said officials at The Gambia’s main airport had been told not to let any of Mr Jammeh’s belongings leave the country.

Reports said some of the former leader’s goods were in Guinea where Mr Jammeh had stopped on his journey into exile.

Mr Jammeh is reported to now be in Equatorial Guinea, although authorities there have not confirmed it.

The former leader had initially accepted Mr Barrow’s election win on 1 December, but later alleged “irregularities” and called for a fresh vote.

The move was internationally condemned and the UN-backed Economic Community of West African States (Ecowas) issued an ultimatum for him to quit or be removed by force.

We may challenge legality of special prosecutor’s office – Haruna Iddrisu