A South Africa pastor who sprays his congregation with insecticide has been widely condemned.

The company that produces Doom warned of the risks of spraying the substance, while a government commission urged anyone effected to lodge complaints.

But the pastor has defended his actions, telling the BBC he is using unconventional methods to heal people.

The country has seen a wave of practices where church members have been subjected to unorthodox rituals to receive healing.

In photos circulating on Facebook and Twitter, Mr Rabalago, who runs the Mountzion General Assembly in the Limpopo province, is seen spraying the insecticide directly into the eyes and various body parts of his congregants.

He told the BBC’s Nomsa Maseko in Johannesburg that he had sprayed the face of one woman because she had an eye infection and claimed the woman was “just fine because she believed in the power of God”.

He also claims the spray can heal cancer and HIV.

“Doom is just a name, but when you speak to it to become a healing product, it does. People get healed and delivered through doom,” a post on the church’s Facebook account reads. 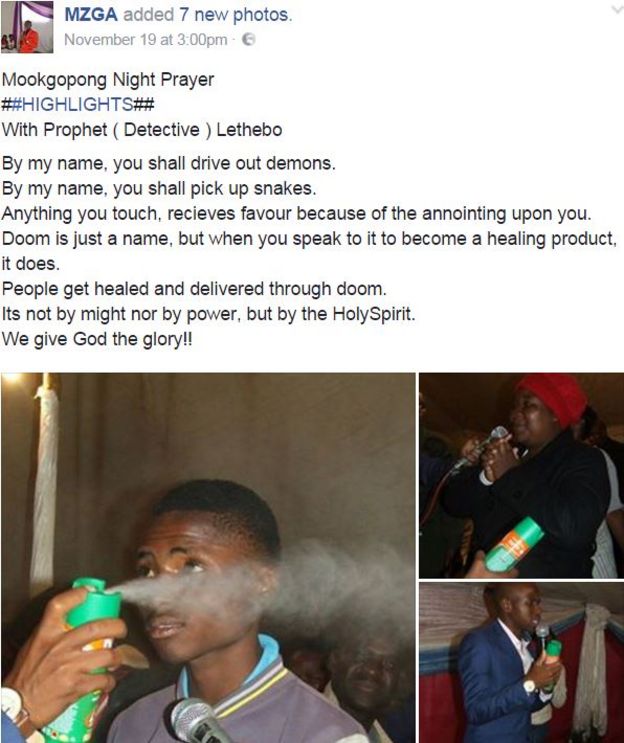 Testimonies of people who have supposedly been healed by Doom have also been posted on the Facebook page.

In another interview, posted on the eNCA website, the pastor is heard saying: “The truth is, Doom can heal people in the right way.”

But Tiger Brands, the company that makes the product, says it finds the practice “alarming”.

“[We] want to make very clear that it is unsafe to spray Doom or any aerosol onto people’s faces,” the company said in a statement.

“Doom has been formulated to kill specific insects which are detailed on the cans, and the packaging has very clear warnings which must be adhered to,” the statement added.

The company said it was trying to contact the pastor to ask him to stop the practice.

Our correspondent reports that the government has set up a commission to investigate motives behind these practices.

South Africa’s Commission for the Promotion and Protection of Cultural, Religious and Linguistic Communities has also condemned the practice, which it says is “detrimental” to the well-being of people. 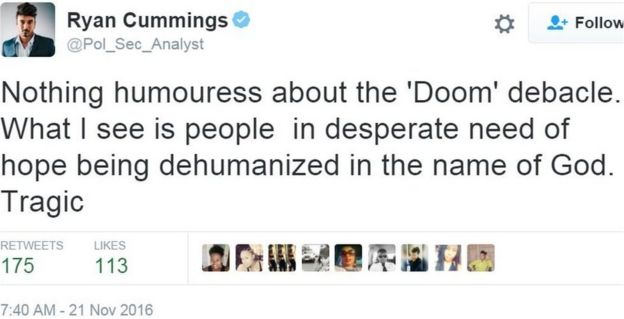 “The CRL Rights Commission encourages everyone whose rights and beliefs have been violated to report such to the Commission,” it said in a statement.

Many social media users have condemned his antics.

Another South African pastor recently drew criticism after pictures of him driving over congregants were posted on social media.

In another incident, a pastor convinced members of his church to eat snakes and grass, and drink fuel for healing.

Symantec to purchase LifeLock for $2.3 billion