The Presidential Candidate for the New Patriotic Party (NPP) Nana Akufo-Addo has taken a swipe at President John Mahama for describing NPP’s pledge to extend the service period for army recruits from 25 years to 30 years as a political gimmick.

According to Nana Akufo-Addo, President Mahama, National Democratic Congress (NDC) Flagbearer, has no moral right to question his pledges since he has reneged on most of his promises.

[contextly_sidebar id=”gOmELVJloJxIHliwcF6oy1fmVyulrOX0″]President Mahama also described this particular promise was a mere afterthought on the NPP’s part as this proposal did not feature in its 2016 manifesto.

But speaking at a rally at Gomoa Akoti in the Central Region, the NPP Flagbearer suggested President Mahama was being hypocritical with his criticism of the retirement age promise.

“The President says our pledge to increase the retirement age of recruits to 30 years as stated by the Sub-Committee Chairman on Defense and Interior, Dominic Nitiwul, is a ploy for vote buying and he is asking Ghanaians not to listen to us,” Nana Akufo-Addo said. 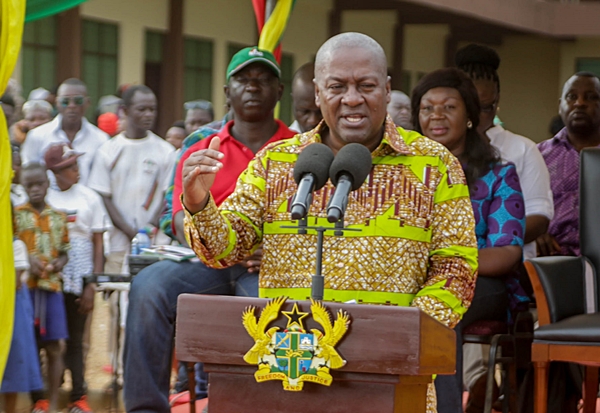 “He also added that he never reneges on his promises. We were all in this country when we were promised the one time national health insurance premium payments. Have they done that?”

“You promised to build 200 community day Senior High Schools. Your own Finance Minister in October and November stated publicly that only nine had been built. Is that a feature of an honest person,” the NPP Flagbearer quizzed.

‘My promises are not election gimmicks’

Earlier on the campaing trail, Nana Akufo-Addo has said he and his NPP were above making promises as a mere political gimmick.

Nana Akufo-Addo assured Ghanaians his promises to make Ghana a better place for all was not just a campaign message to win votes.

He said to the people of Hohoe in the Volta Region during a rally that the NPP had a competent team to execute all the promises made on the campaign trail Ghanaians.

As part of plans to industrialize and transform the Ghanaian economy, Nana Akufo-Addo indicated that his government plans to help establish a factory in each of the 216 districts across the country, if he wins the 2016 elections.

Nana Akufo-Addo also promised to establish one dam in every village in the northern part of the country to boost agriculture through a well planed irrigation policy.

The NPP Flagbearer also promised to create another region from the Western Region, should he emerge winner in the December polls.

Nana Akufo-Addo’s promises have however been met by questions of feasibility and criticism from the governing National Democratic Congress (NDC) with the party largely accusing him pandering for votes.