The Progressive People’s Party (PPP), says it is more convinced that the Electoral Commission is being used by some individuals within the political space to ensure that its flagbearer, Dr. Papa Kwesi Nduom, does not participate in this year’s presidential election.

This follows an announcement by the Electoral Commission that it has filed an application at the Supreme Court to quash a High Court decision to allow Nduom correct errors on his presidential nomination forms that formed the basis for his disqualification by the EC.

[contextly_sidebar id=”Js8eHv3qGYf7Popbmp7KJ1JB9WQZrI47″]The EC in the press release said the action was “in the overall national interest and was on the grounds of public policy that the Supreme Court provides clarity on this matter.”

Speaking on Eyewitness News on Monday [October 31], he said, “It is quite unfortunate that the EC will be doing the bidding of somebody else and being allowed to be manipulated in this manner.”

“You can’t put your job as a returning officer down and transform yourself into a crime officer, an investigator, attorney general and a judge of a high court and conclude that because someone had a problem with his nomination forms that person has engaged in some criminal conduct and for that matter that person does not qualify to be a presidential candidate in Ghana,” he said.

“Somebody is determined that so far as Nduom is on the ballot paper, they don’t event mind if the elections does not take place at all; but I think the supreme court will deal with this matter expeditiously in a manner that tells everybody that they are only engaged in an act in futility and embarrassing themselves,” he stressed.

He told the host, Richard Sky that, the party is yet to receive a copy of the Commission’s lawsuit and its lawyers will appropriately respond in due course.

An Accra High Court on Friday [October 31] told the Electoral Commission to adhere to its own rules in the conduct of the 2016 general elections. 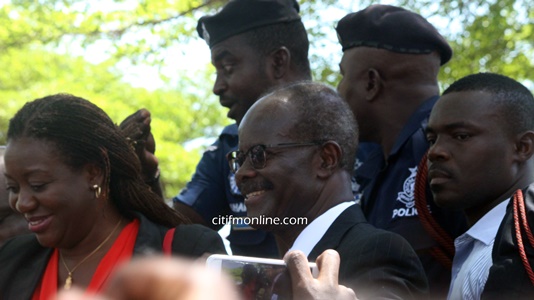 It remarked that the EC’s decision to disqualify Papa Kwesi Nduom of the PPP from participating in this year’s elections was against its own rules as stated in Regulation 9 of the CI 94, that demanded that parties be allowed to make corrections to their nomination forms should any be found by the EC after their submission to the EC.

Dr. Nduom had filed a lawsuit in court to challenge his disqualification from the Presidential race following some errors found on his nomination forms.

The Electoral Commission (EC) had stated that, it cannot be ordered by a court to accept the nomination forms of Dr. Papa Kwesi Nduom.

The lawyer for the EC, Thaddeus Sory, said the Commission is an independent body therefore it cannot take instructions from any other body.

Sory said this during the hearing in which the PPP is praying the court to restrain the Commission from proceeding with balloting for positions for presidential candidates ahead of the polls.