Gov’t to move Gandhi statue from University of Ghana

Government will move the Mahatma Gandhi statue on the University of Ghana campus to ensure its safety, the Ministry of Foreign Affairs has said.

This comes a day after Citi News reported the statue had been defaced by some unknown persons who were incensed by its presence in the academic community. 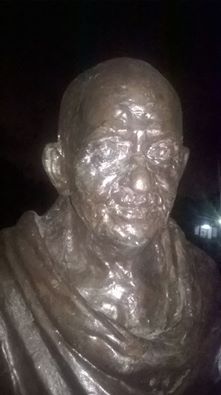 A statement issued by the Ministry of Foreign Affairs and Regional Integration on Wednesday [October 5] described as “unfortunate verbal attacks”, allegations of Mahatma Gandhi being a racist not worth honoring with a statue.

It said the comments are an “attack on an Indian Nationalist Hero and icon who is revered and cherished by over one billion people who are either citizens of India or persons of Indian decent.”

The Ministry lamented the comments and agitations against the situation of the statue on the University had the potential of creating disaffection for Ghana at the level of Government relations and among Ghanaians across the world.

It added that, “While acknowledging that human as he was, Mahatma Gandhi may have had his flaws, we must remember that people evolve.  He inspired movements for civil rights and freedom across the world.”

“The government would, therefore want to relocate the statue from the University of Ghana to ensure its safety and to avoid the controversy on the Legon Campus being a distraction of our strong ties of friendship that has  existed over the years.

To this end, the Ministry is urging Ghanaians to look beyond the comments attributed to Mahatma Gandhi and acknowledge his role as one of the most outstanding personalities of the last century who demonstrated that non-violent,” the statement concluded.

A former Director of the Institute of African Studies, Professor Akosua Adomako Ampofo, in September started a campaign demanding the removal of the statue of Indian independence icon, Mahatma Gandhi, from the University of Ghana campus.

Prof Adomako Ampofo together with another academic at the Institute of African Studies at the University of Ghana, Dr. Obadéle Kambon, urged members of the University of Ghana Council to heed to the petition arguing among other things that, Gandhi was racist against black people and honoring him sets the wrong example for students.

But, Ghana’s former High Commissioner to India, Professor Mike Ocquaye, has described as unnecessary demands for the demolition of the statue.

According to the professor of political science and lawyer, a decision to demolish the statue might have implications on diplomatic ties between Ghana and India.

So far, the university authorities have not commented on the matter, and have also not responded to the petitioners.

But it appears some unknown persons in support of the call, may want to take the law into their hands, by gradually destroying the statue.