The National Democratic Congress (NDC), has dismissed suggestions that President Mahama used helicopters during his tour of the Northern Region because of the deplorable state of roads in that part of the country.

The Spokesperson for Nana Akufo Addo, the flagbearer of the opposition New Patriotic Party (NPP), Mustapha Hamid, suggested that recent personal attacks by President Mahama on the opposition candidate were only attempts to divert people’s attention from the deplorable conditions in the region.

[contextly_sidebar id=”3sJXeBdDVlJi8unbVPQIWnq8nzRGsouH”]He added that, the president’s tour of the region in a helicopter was proof that the roads in that part of the country were unmotorable.

“You are flying helicopters because your roads are unmotorable and you don’t want us to talk about that, you want us to talk about what is happening in somebody’s party. How does what is happening in somebody’s party put bread on my table or make it possible for somebody from Bimbilla to take his food produce to Yendi to sell?” Mustapha Hamid noted on Eyewitness News on Wednesday.

However, a deputy General Secretary of the governing party, Koku Anyidoho, has rejected these claims, describing Mustapha Hamid’s comments as political propaganda.

According to him, the roads in the Northern Region have seen major development since the NDC came into power, something he believes the opposition is well aware of.

He explained that, the decision to use the helicopters on the tour was due to the number of stops the president had to make in the region.

According to him, the use of helicopters by Heads of State in Ghana was not new and the fuss being made about this was unnecessary.

“He [Mahama] is not the first president to use a Helicopter. Kwame Nkrumah used one, former presidents also used them, President Kufuor also used some. It’s neither here nor there. The president has a lot of stops to make and so some of this is done by Helicopter, it’s nothing new,” he added. 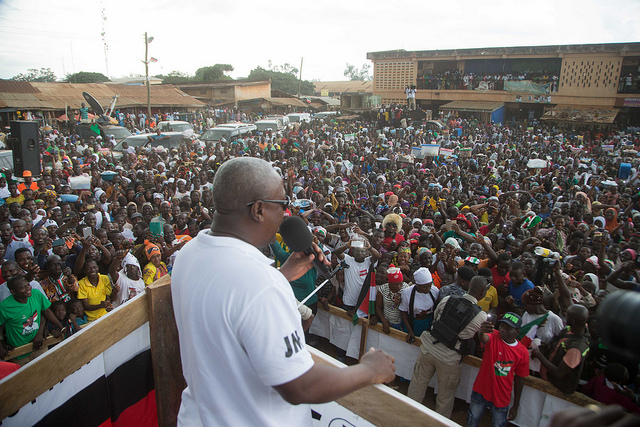 Bad roads or not?

This is not the first time the two parties have clashed over roads on their campaign tours.

Nana Addo had bemoaned the state of roads in the region during his five-day tour of the Western Region, criticizing the government for failing to honour its promise to fix the roads.

President Mahama, who toured the region days after, hit back at Nana Addo, stating that the NPP flagbearer must have been sleeping to have missed the good work done by the government on the roads.

The NPP described the comments as unpresidential while the party’s flagbearer said that “did not see the roads he [President Mahama] constructed. It was the same poor muddy roads I used in the region. I was wondering what roads he was talking about.”