The National Labour Commission (NLC) has ordered the Ghana Association of Biomedical Laboratory Scientists (GABMLS), not to embark on its proposed strike on August 22.

The NLC, in a letter sighted by Citi News, explained that the laboratory scientists are essential health service providers and thus must be restrained from any form of service withdrawal.

[contextly_sidebar id=”jZ1buJ6twuIV13SaEnZtbR0dcP0IJXKj”]“The GABMLS and its members are essential service providers and are therefore restrained for embarking on any kind of strike whether total withdrawal of services, go slow or sit down as provided under section 163 of the labour act 2003 (Act 651) and regulation 20 of the Labour Regulation 207 LI 1833.”

The laboratory scientists on Thursday served notice of the strike set for August 22, after the Health Minister, Alex Segbefia missed a planned meeting to discuss the stalled implementation of the National Health Laboratory policy.

But the Ministry responded to the association’s explanation for the strike notice, saying the Minister did not show up because he was not invited to the said meeting that has angered them.

Parties to appear before the NLC

With the conflict in mind, the NLC has ordered the Health Ministry and GABMLS to appear before it on September 7 2016 for “a hearing and settlement of the matter.”

The NLC has also ordered the Health Ministry to furnish it with “an update of the steps taken to resolve the grievances of GAMBLS.” 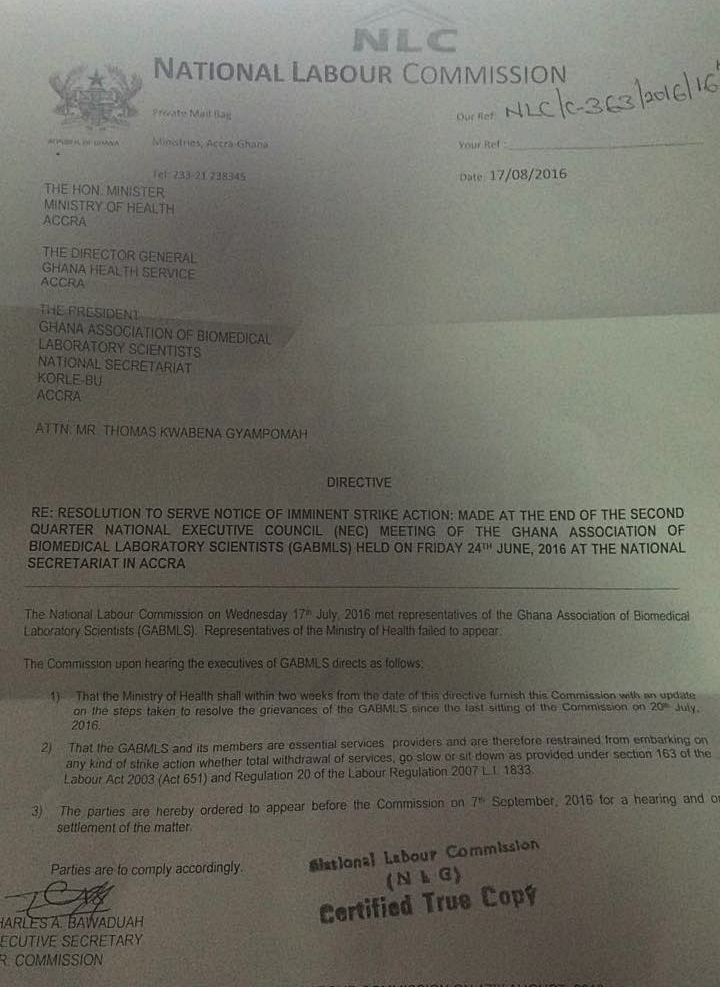 A statement signed by the President of GABMLS, Ignatius Awinibuno, accused the Health Ministry of disregarding their prior threats to strike saying, “the Minister of Health is not interested in improving and strengthening medial laboratory services for better quality health care in the country.”

The association had been calling on government to implement the National Health Laboratory policy as a matter of urgency.

The association believes this new policy is critical to raising the quality of laboratory science practice to international health standards.