The Ministry of Health has denied allegations by the Ghana Association of Biomedical Laboratory Scientists (GABMLS) that the sector minister boycotted a meeting with the association hence its decision to strike.

The laboratory scientists yesterday [Thursday] served notice of the strike set for August 22, after the Health Minister, Alex Segbefia missed a planned meeting to discuss the stalled implementation of the National Health Laboratory policy.

[contextly_sidebar id=”9brtsYmWdxe2lAPJvBZJxUbkfAD4Uzfv”]But the Public Relations Officer of the Ministry, Tony Goodman responded to the association’s explanation for the strike notice saying the minister did not show up because he was not invited.

“All our checks in the ministry to find out if even a letter was sent inviting the minister have proved futile. We have not seen any letter,” Mr. Goodman retorted.

“I have seen their release stating that they went to the Labour Commission and the Minister didn’t show up. We did not see any letter from the Commission inviting the Minster for Health. We will issue a statement very soon. In the statement all of this will be in it,” he stated.

A statement signed by the President of GABMLS, Ignatius Awinibuno, accused the Health Ministry of disregarding their prior threats to strike saying, “the Minister of Health is not interested in improving and strengthening medial laboratory services for better quality health care in the country.” 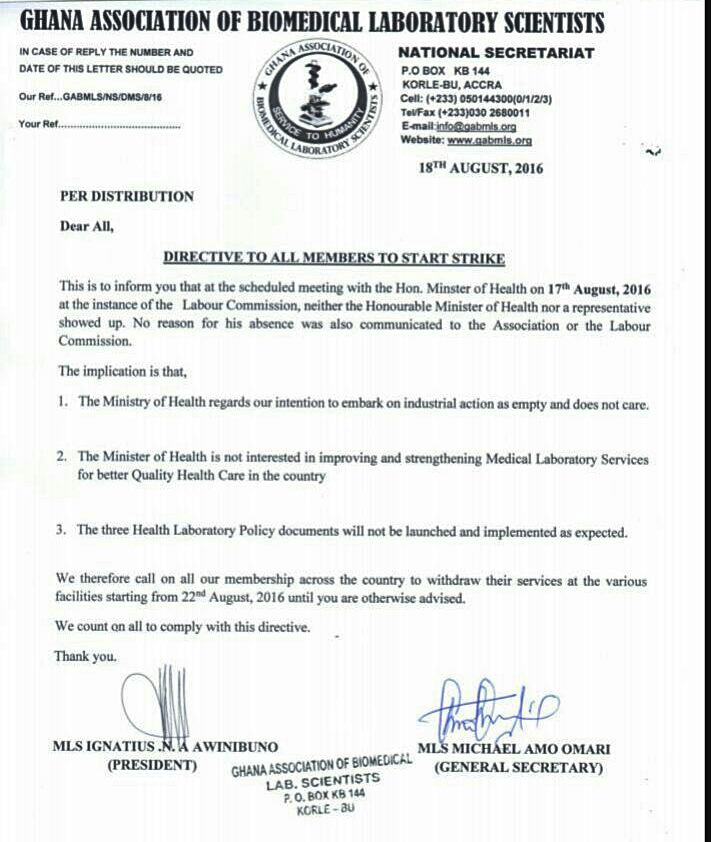 The association has in recent times been calling on government to implement the National Health Laboratory policy as a matter of urgency.

The association believes this new policy is critical to the raising the quality of laboratory science practice to international health standards.

Obinim sued by Xavier-Sosu, 2 others for lashing ‘fornicators’