Mrs. Linda Akwele Ocloo, a teacher with no political experience, whose husband died in a tragic car crash in March after he won the primary, shockingly opted to contest, ostensibly in memory of her husband.

[contextly_sidebar id=”RRqSwIuAkTw8QAZKyzkh9REiOcPpXOsA”]There were suggestions she could not make any impact and would be no match for Dr. Kpessa Whyte, Executive Director of the National Service Secretariat, who contested her late husband in the first primary of four contestants and came second.

But at the end of voting on Saturday June 18, Linda Akwele Ocloo polled 5,156 votes, with Dr. Kpessa Whyte managing 3,372 votes. 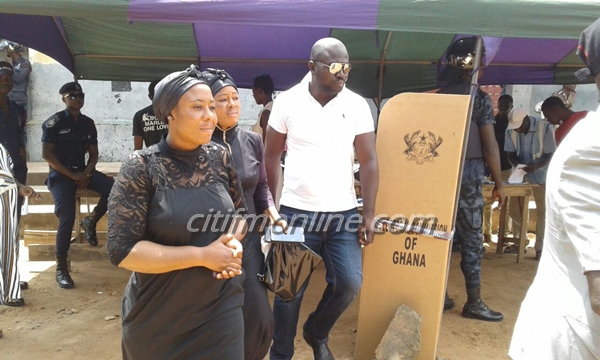 The late Desmond William Ocloo won the primary in November 2015, by triumphing over David Tetteh-Assumeng, who has been in Parliament since 2004.

This means Dr. Whyte in the second primary, only added 183 votes to his previous figure.

But the National Democratic Congress’ (NDC) incumbent Member of Parliament MP for Shai Osu Doku, David Tetteh Assumeng, opted out of Saturday’s primary in solidarity with the deceased, Desmond William Ocloo, leaving the contest between Mr. Whyte and Linda Ocloo.

I will unite constituency and work hard – Linda Ocloo

Madam Ocloo in her victory speech promised to ensure unity and bring development to the constituency should she emerge the winner of the polls after November 7 polls.

She noted that the constituency lacks a lot and thus she will work hard to bring relief to the people. She further promised to work hard to increase the votes of the NDC at both the presidential and parliamentary levels.

Before the collation of results ended, Dr. Kpessa White allegedly directed his officers to lock up his office and directed all his agents to leave the collation centre, for their various homes as a sign of conceding defeat.

Despite heavy rains in some parts of the constituency, voters defied the rains to cast their votes. Dr. Kpessa Whyte was conspicuously missing at the collation centre when the results were declared.

Moments after the declaration, the Dodowa Township, which is the capital of the district, was thrown into an ecstatic mood.

During the voting however, some voters at the Post Office polling station in Dodowa, hooted at Dr. Kpessa Whyte, when he visited the area to observe the voting process.

Dr. Whyte and his team were met with hooting from the charged crowd at the Post Office polling station.

According to the crowd, Dr. Kpessa Whyte has allegedly brought land guards to intimidate them for which they were hooting at him and his team of well-built men. The situation could have gotten chaotic but for the timely intervention of the police who beefed up the numbers of personnel at the polling station.
–
By: Elvis Washington/citifmonline.com/Ghana