Swedish footballer sent off for farting during match

A Swedish footballer has called a referee a ‘buffoon’ after he was sent off for farting during a match – with the official accusing him of ‘deliberate provocation’.

Adam Lindin Ljungkvist was playing at left-back for Pershagen SK in the seventh tier of Swedish football when he was shown a second yellow card in the final minute of the game.

Describing the surreal moment, the 25-year-old said: ‘I had a bad stomach, so I simply let go. Then I received two yellow cards and so a red.

‘Yes, I was shocked, it’s the strangest thing I have ever experienced in football’.

Adam Lindin Ljungkvist, a footballer in Sweden, was shown a red card for farting during a match

He added: ‘I asked the referee “what am I not allowed to break wind a little?” He replied “no”…I don’t get it but maybe he thought I farted in my hand and threw the fart at him. But I did not’.

The aggrieved defender told Aftonbladet: ‘To provoke anyone with a fart is not particularly smart or normal. It’s nonsense – I just broke wind and got a red card.

‘I spoke to the referee afterwards, I was annoyed, but there were no bad words. I just said he was a buffoon.’

Reflecting on the ‘crappy judgement’, he said: ‘I can only laugh about it. This has to be unprecedented, surely. I’ve never heard of anyone who has been sent off for doing a fart.’

Opposition striker Kristoffer Linde told Länstidningen Södertälje: ‘I was standing a good distance away but I heard the fart loud and clear. It’s the strangest thing I’ve seen on a pitch, and I’ve been playing football since I was eight years old.’ 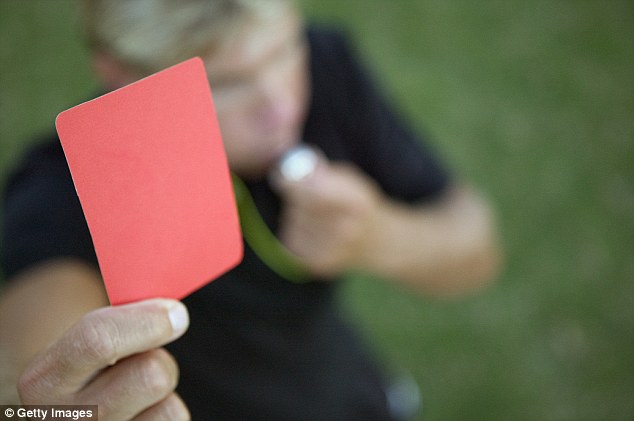 Explaining his decision, the referee Dany Kako said: ‘I perceived it as deliberate provocation. He did it on purpose and it was inappropriate. Therefore, he received a [second] yellow card.’

The defiant official added: ‘Once there was a player who stood and peed next to the pitch. I showed him a yellow card, too.’

The bizarre incident came in the closing moments of the match which Pershagen SK lost 6-2 to Järna SK’s reserve team last Friday night.