Leading names from both sides of the EU referendum have traded blows in a live TV debate at Wembley Arena on the eve of the final day of campaigning.

The BBC’s Great Debate featured almost two hours of questions on immigration, the economy and sovereignty.

Scottish Tory leader Ruth Davidson repeatedly clashed with Boris Johnson in front of an audience of thousands and accused his Leave side of “lying”.

Voters go to the polls from 07:00 BST on Thursday, to decide whether the UK should stay in or leave the European Union.

The former London mayor got a standing ovation from his supporters after his closing statement, in which he declared: “Thursday can be our country’s independence day” if Britain votes to leave. 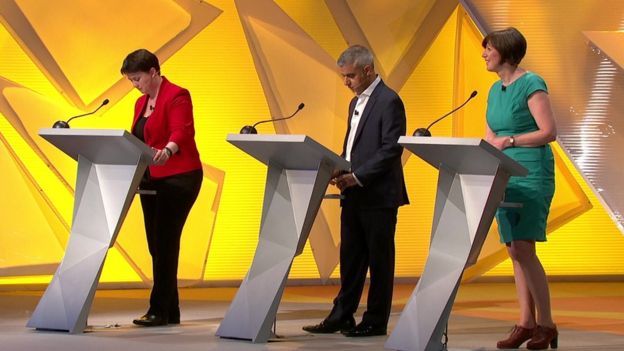 Ms Davidson, who gave the closing statement for Remain, told the Wembley audience they had to be “100% sure” adding that there was “no going back on Friday morning”.

Her side “refused to dismiss the experts” who all agree that “Britain is better-off in,” she argued.

The BBC’s political editor Laura Kuenssberg said the Leave side had the most “emotional enthusiasm” at the televised debate but Remain were able to display the passion some feel has been missing from their campaign.

New faces – to many people at least – Ruth Davidson and Sadiq Khan worked together to make arguments for the EU rather than excuses for it, she added.

The debate, the biggest of the EU referendum campaign, represented a final chance for the two campaigns to get their points across ahead of Thursday’s poll. 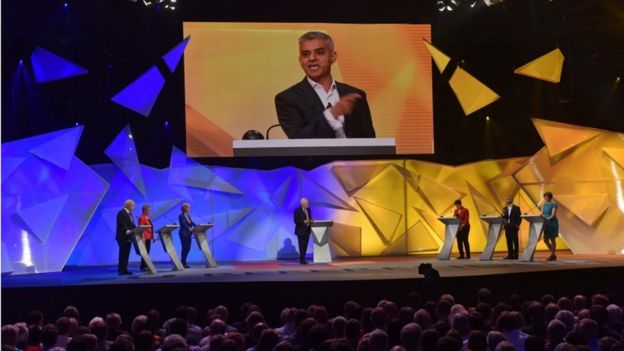 There were heated exchanges throughout between Mr Johnson and his Remain-backing successor as London Mayor, Sadiq Khan, who accused Leave of running “project hate”.

The lively audience – split between Leave and Remain supporters – applauded each time their side landed a blow as subjects including Turkish EU membership, trade deals and the power of EU courts were debated.

Also on the panel for Leave were energy minister Andrea Leadsom, who attacked the Brussels “gravy train”, and Labour MP Gisela Stuart. Frances O’Grady, general secretary of the Trades Union Congress, completed the line-up for Remain.

Trade and economy
The first skirmishes were on trade and the economy, with Conservative and Labour Party colleagues trading blows.
Mr Khan and Mr Johnson clashed as the London mayor accused his predecessor of changing his mind over the benefits of the EU to businesses.

Mr Johnson said Remain “keeps talking down our country” and that the EU held back the UK’s trading progress with the rest of the world.

Responding to the opening question from the owner of a small business, Ms Davidson said she knew people found the EU “frustrating and fussy”, but said it provided “a level playing field” for small businesses. She said if the UK leaves, the rest of the EU would impose tariffs and taxes.

She read out previous quotes on job losses from key Leave figures including Mr Johnson, who hit back by saying the Remain campaign was “back to project fear”.

He said it was “extraordinary” to suggest tariffs would be imposed on the UK, saying Germany would be “insane” to do so.

Ms Leadsom, for Leave, said the UK had led the way on workers’ rights, not the EU. “We do not need unelected, bureaucratic European leaders to tell us what our workers’ rights can be.”

Immigration questions
As the debate moved onto immigration, Mr Khan said the Leave side – which has campaigned hard on the subject – had not been “project fear”, it had been “project hate”.
Brandishing a Vote Leave leaflet, he accused the rival side of “lying” and “trying to scare people” by saying Turkey was set to join the EU.

“Turkey isn’t about to join,” he said.

Ms Stuart said the UK government was actively trying to “accelerate” Turkish membership. She also said it was “simply a statement of fact” that uncontrolled immigration put pressure on services.

Also on immigration, a man in the audience asked how many people arriving per year the UK could “reasonably cope with”.

Ms O’Grady said it was important to “manage” migration but said she was “fed up” with migrants being blamed for government shortcomings.

Ms Leadsom attacked the Brussels “gravy train” which she said controlled 60% of UK laws and regulations.

She said the UK had been voted down every time it had tried to object to an EU imposition.

“How is that making our own decisions?” she asked.
Her Tory colleague Ms Davidson said the 60% figure was a “blatant untruth”. She accused the Leave side of “lying” on this and other subjects including Turkish membership.

Mr Johnson said the home secretary was unable to deport serious criminals because of European laws, saying it was “absolutely amazing how the Remain side have the cheek to tell us we improve our security by staying in this organisation”.

But Mr Khan challenged him to name one of the UK’s Nato allies that supported a vote to leave the EU.

As well as the main panellists there was a smaller stage featuring campaigners from other political parties, business and journalism.

Green Party MP Caroline Lucas said immigration “goes two ways”, adding that it was an “amazing gift” for Britons to be able to work and study overseas.

UKIP’s Diane James defended a recent poster from her party showing a long queue of migrants in Slovenia, saying similar images had been used in the media to show the problems with EU free movement.

Also on the second panel were former Sainsbury’s chief executive Justin King, who backs remaining in the EU, and founder and chairman of the Wetherspoons pub chain Tim Martin, who supports Brexit.