Exclusive homes located on Sydney’s Collaroy Beach are in danger of collapsing after high tides and huge waves caused severe erosion for a second night.

Collaroy Beach has narrowed by up to 50m following a massive storm cell that hit Australia’s east coast.

Four people died in the storms and another three are still missing.

Conditions eased in the state of Tasmania on Tuesday and the worst of the weather has passed.

‘Creaking and groaning’
The multi-million dollar waterfront properties on Collaroy Beach lost backyards, decks and a swimming pool after 13m-high waves and a spring tide – known as a king tide in Australia – pummelled the beach.

A second spring tide hit the beach on Monday night, eroding the sand by another 5m and causing additional damage to the houses. A further spring tide is expected on Tuesday night.

Prof Ian Turner, the director of University of New South Wales’ Water Research Laboratory, was at the beach on Monday night and said it had narrowed by about 50m, and it was clear a number of homes were badly damaged.

“We could hear [the houses] creaking and groaning. Some of them have clearly suffered a degree of structural damage,” Prof Turner said.

“They will require a very careful look before people can go back inside them.” 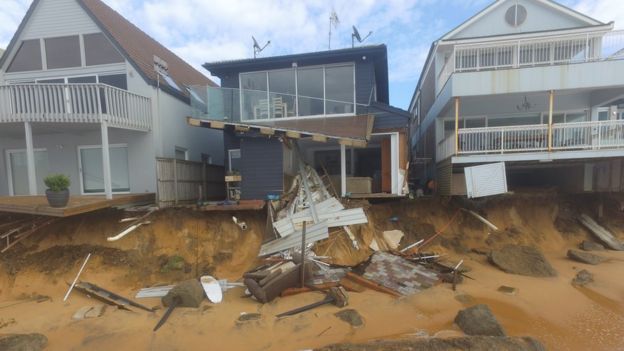 Prof Turner said surveys indicated sand levels on the beach had dropped between 2m and 5m, with 150 cubic metres of sand stripped for every metre along the beach.
Engineers will assess damage to the houses before property owners are allowed to return.

The Insurance Council of Australia told the Australian Broadcasting Corp that many insurance companies excluded actions by the sea from policies.

This means it is likely that at least some of the damaged properties are uninsured.

Death toll grows
On Tuesday, the body of Mary Kathleen Allford, 75, was found at Latrobe in northern Tasmania.

Rescuers were not able to save Mrs Allford after her home was inundated, but managed to rescue her husband through the property’s roof.

Three other confirmed deaths in New South Wales and the Australian Capital Territory occurred after vehicles were caught in floodwaters.

Three people are still missing, including Trevor Foster, who was swept into Tasmania’s Ouse River from his own backyard on Monday.

Also missing is a man who reportedly jumped into rough seas off Bondi Beach.

Flood warnings remain in place for three rivers in Tasmania, with residents of Invermay and Longford told to evacuate.