Andy Carroll scored against his former club as West Ham leapfrogged Liverpool in the table thanks to a first league double over the Reds for 52 years.

Liverpool midfielder Emre Can was denied by the bar but Jurgen Klopp’s side were off the pace throughout.

West Ham’s second straight win lifted them to fifth in the table, Liverpool dropping to eighth.

Liverpool travelled to London knowing victory would leave them just two points off a Champions League place after back-to-back festive wins over Leicester and Sunderland.

Yet this was a stark reminder to Klopp that he has his work cut out in 2016 after a lacklustre display that had echoes of the 3-0 defeat by Watford last month.

Can did clip the Hammers bar with a curling effort from the edge of the penalty area in added time at the end of the first half. The closest they came prior to that effort was Jordan Ibe’s low shot in the fourth minute which whistled just wide.

Lucas then had a header cleared off the line by Mark Noble at 2-0 and substitute Joe Allen wasted a great chance late on. However, West Ham showed more attacking threat and more energy, and were just as impressive as they were when they defeated Brendan Rodgers’ Reds 3-0 in August.

Day for Carroll to remember, Benteke to forget

Carroll has endured some dark days at West Ham since joining for £15m in June 2013 thanks to injuries, but this was a day to remember for the former Reds player, who remains Liverpool’s record signing.

He produced a trademark header to meet a wonderfully weighted cross, Clyne again beaten in the air as he was for Antonio’s goal. Carroll celebrated as though his goal had decided the title. 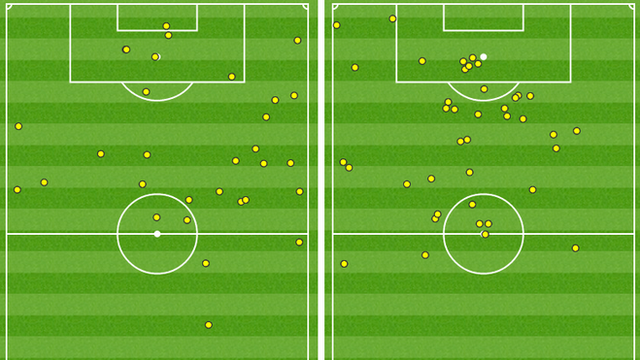 The above graph shows Christian Benteke (right) had more touches in the opposition penalty area than Andy Carroll yet it was the West Ham striker who still made the bigger impact.

In contrast, Christian Benteke – Liverpool’s second costliest player – endured a miserable day as his first touch deserted him time and again. He was played through in the 25th minute but allowed James Tomkins to whip the ball off his toes before ballooning a 58th-minute chance over the bar.

How far can West Ham go this season?

Hammers boss Slaven Bilic was not even born the last time West Ham did the double over Liverpool. As poor as the Reds were, West Ham were impressive.

James Collins was excellent at the back as West Ham recorded a fifth clean sheet in seven games, Noble produced a performance full of grit and determination in midfield and Antonio, who started the season at Nottingham Forest, was lively on the wing and fully deserved his second goal in two games.

Liverpool join Arsenal, Manchester City, Chelsea and Southampton on the list of scalps West Ham have claimed in the Premier League this season.

Will they be starting life at the Olympic Stadium next season in European competition? You would not rule it out at this stage.

There were contenders all over the pitch for West Ham. Mark Noble was excellent throughout in midfield but Michail Antonio, who this time last year was playing for Nottingham Forest in an FA Cup defeat by Rochdale, who caused Liverpool’s shaky defence problems throughout with his marauding runs.

What the managers said

West Ham manager Slaven Bilic: “We created many not only on the break but from open play and we could have scored more. To keep a clean sheet at home to Liverpool is brilliant for the fans and it’s a brilliant start to the New Year.

“We played a really good game – especially in the second half. Of course Liverpool had their moments because they are a good passing team but we defended really well as a team.”

Liverpool manager Jurgen Klopp: “The game was decided by two crosses and two headers. At the end of the first half we had our moments but it was not enough.

“We always had the ball. We could have made more chances but we didn’t so we have to accept that again we didn’t play like we should.”

The stats you need to know

West Ham’s next match is an FA Cup third-round home tie with Wolverhampton Wanderers (15:00 GMT) next Saturday before travelling to Bournemouth (19:45 GMT) in the Premier League on 12 January.

Liverpool have two cup ties before their next Premier League game at home to Arsenal (20:00 GMT) on 13 January. They are at Stoke City (20:00 GMT) in the League Cup semi-final first leg on Tuesday then travel to Devon to face League Two Exeter City (19:55 GMT) in the FA Cup third round on Friday.