Bomb explodes at rally in Ukraine

A bomb has killed at least two people, including a police officer, and injured at least 10 more at a rally in Ukraine’s second city Kharkiv.

The rally was one of several being held to mark a year since the Kiev uprising that led to the fall of pro-Russia leader Viktor Yanukovych.

Kharkiv lies outside the conflict zone in eastern Ukraine, where a ceasefire appears finally to be taking hold.

The government has agreed to start pulling back heavy weapons from Sunday, and the rebels said they would start the process on Tuesday.

The pullback will not be completed until at least 8 March, five days later than the deadline set at peace talks in Minsk this month.

Another key element of the Minsk deal moved forward on Saturday when the Ukrainian government and the rebels exchanged 191 prisoners.

The BBC’s Paul Adams in Donetsk says these two factors provide a glimmer of hope for the deal, but with so much suspicion and bad faith between the two sides, no-one should assume immediate results.

The ceasefire continues to be breached, notably in Debaltseve, a key transport hub captured by the rebels in recent days, an OSCE official said.

Alexander Hug added that the humanitarian situation there was “relatively catastophic”.

“The local population reported to us that there is no water, no food, no gas, no heating, no electricity, no medication. And all the buildings that our monitors have seen, all of them, have been affected by the fighting,” he said. 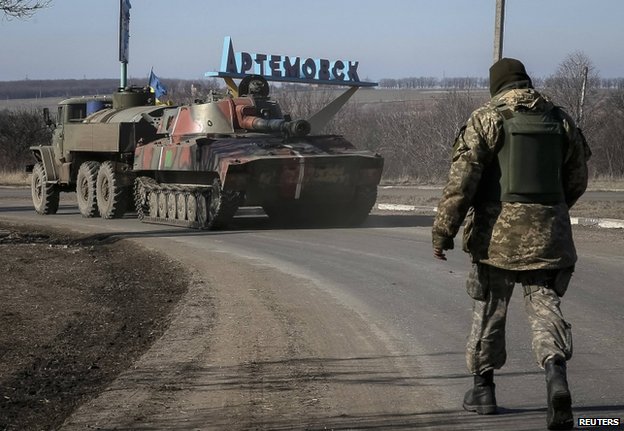 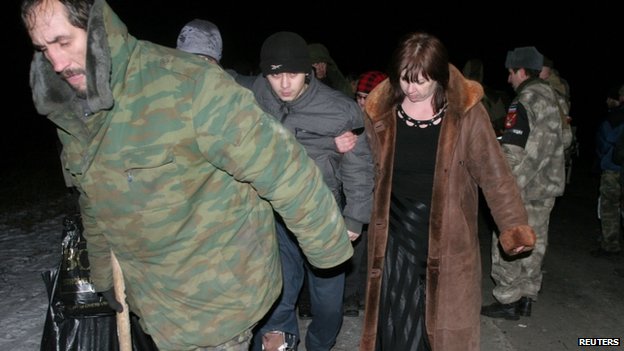 Fifty-two captured rebels were released, along with 139 pro-government troops and fighters

The blast took place during a march to mark the one-year anniversary of clashes in the capital Kiev, which left more than 100 people dead and drove the then president, Viktor Yanukovych, from power. Petro Poroshenko, the present president, and a number of European leaders attended the main march in Kiev.

The explosion follows other blasts in Kharkiv and elsewhere in Ukraine. Kharkiv lies outside the conflict zone in eastern Ukraine but there have been concerns that Russian-backed separatists could target it as well.

In Kiev, the main march went peacefully. President Poroshenko and European leaders led a procession of thousands around the main locations where protesters fought riot police one year ago.

The explosion in Kharkiv happened at 13:20 (11:20 GMT) as people gathered near the city’s Palace of Sport for a march in support of national unity, Ukrainian media say.

An unnamed regional prosecutor quoted by Reuters news agency said an explosive device had apparently been thrown from a car.

Eyewitness Alexei Grechnev told the BBC that he and his wife were 20-30m from the explosion.

“We were walking in a column of people, in the front section, when I heard a loud boom and saw some people fall to the ground a few metres away from me, a somewhat unexpected and unreal scene, like in movies,” he said.

A photo apparently taken at the scene shows a body draped in a Ukrainian flag as ambulances stand nearby. 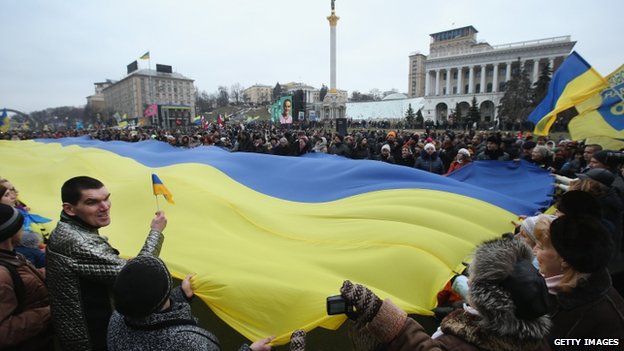 Thousands rallied in Kiev for the largest of several “dignity marches” 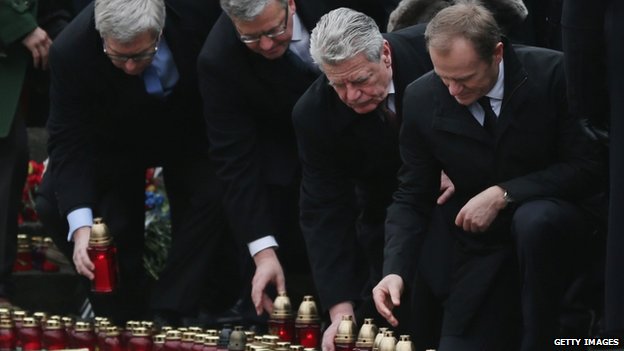 “Ukraine’s security service detained persons who may have been involved in the preparation and carrying out of crimes of a terrorist nature in Kharkiv, including the explosion,” security service spokesman Markian Lubkivskyi wrote on his Facebook page.

He later said the four suspects were Ukrainian citizens who had received instruction and weapons in the Russian city of Belgorod, just across the border.

Before Sunday’s explosion, Kharkiv, in the north-east of Ukraine, had seen more than a dozen attacks over three months, including an explosion in a bar used by pro-government activists which injured more than 10 people in November.

That attack was blamed on a pro-Russian group calling itself the Kharkiv Partisans.

Meanwhile, thousands of Ukrainians have been taking part in “dignity marches” in the capital Kiev and other cities, remembering the victims of sniper fire during protests last February.

European leaders including European Council president Donald Tusk, German President Joachim Gauck and the leaders of Lithuania, Poland and Moldova have been attending in Kiev.