US girl, 7, hailed after plane crash

A seven-year-old girl who survived a plane crash in the US state of Kentucky and walked barefoot to find help has been praised for her courage.

Larry Wilkins, 71, told the BBC that he answered the door to the “brave girl” on Friday and that she told him her parents were dead.

The plane was later found along with the bodies of the girl’s parents, her sister and a cousin.

The girl has been named as Sailor Gutzler of Nashville, Illinois.

Mr Wilkins said Sailor had walked almost a mile (1.6km) through a dark, dense wood in temperatures of about 40F (4C) to reach his house in Lyon County on Friday evening.

He added that she had been crying and bleeding when she arrived and had obviously “been through hell”. 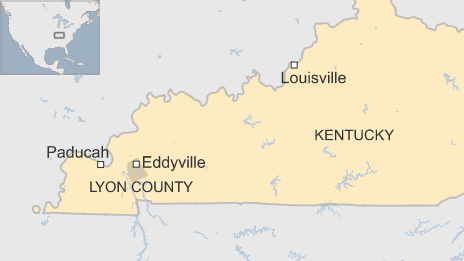 “She had a bloody nose, her legs were scratched terribly bad,” he said.

Mr Wilkins thought that she had followed the light from his house to get to safety.

“Can you imagine a seven-year-old losing her mother and sister and cousin in an aeroplane crash and then having to walk like she did from there to here?”

The girl is reported to have been released from hospital on Saturday after receiving treatment for minor injuries.

Kentucky State Police Lt Brent White said: “I’ve got an 8-year-old child myself. And when I saw this – what appeared to be a seven-year-old child that walked through this dense forest through some really tough terrain. Awful poor weather conditions – and survive this, it’s just really a miracle.”

The plane was found on Friday, about 30 miles (50km) east of Paducah city.