Liverpool captain Steven Gerrard says being told he will start fewer games is the main reason he has decided to leave Anfield for America in the summer.

Gerrard will join a Major League Soccer (MLS) club at the end of the season.

The midfielder, 34, told Liverpool’s website:  “The key conversation was when the manager sat me down and said it was time to manage my games.

“It was a very difficult conversation to have. I’m bright enough to realise it is the right thing. I accept it.”

Gerrard has started 17 of Liverpool’s 20 league games this season. Only Raheem Sterling and Jordan Henderson have started more.

But the former England skipper had to deny rumours of a rift with boss Brendan Rodgers after being omitted from the Reds’ side which beat Stoke in November – on the 16th anniversary of his debut for the club.

Gerrard added: “When you’ve been a starter and a mainstay in the team for such a long time… I had an idea the conversation was going to come at some time, but it was a painful conversation.”

MLS club Los Angeles Galaxy have been mooted as a possible destination for the former England skipper, but Gerrard said he is yet to agree terms with a club.

“I’m not over the line with any team yet. I’m close and as soon as I know, I’ll make the announcement,” he said.

A clearly emotional Gerrard said he had been “blown away” by the reaction to the news that he is to end his long association with Liverpool.

“I can’t read much of the reaction at the moment. I keep switching the TV over,” he said.

“I didn’t realise it would be as big as this. It’s very flattering and I’m very humbled by it. ”

He also expressed regret that his association with Rodgers had not begun earlier.

“I wish I’d met Brendan when I was 24 because I think I’d be sitting here talking about a lot of titles that we’d won together,” he said.

“Brendan came into this club when I was 32 years of age and it’s a shame that relationship didn’t start 10 years ago.”

Gerrard could join his former England team-mate Frank Lampard in the MLS.

Lampard, 36, left Chelsea last year to join New York City FC, but has been playing for their co-owners Manchester City, where he will stay until the end of this season.

Gerrard stressed that he is fully focused on doing his best for Liverpool for the remainder of the season. 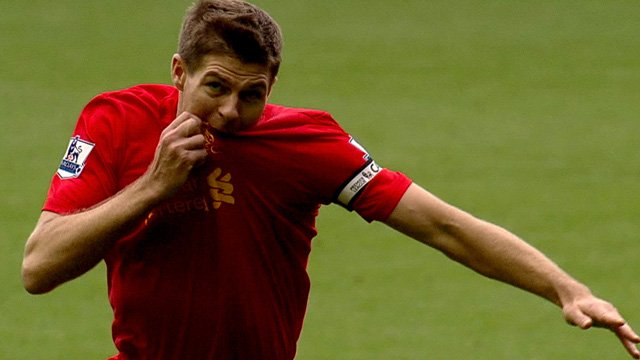 “These next six months are a very important period for myself and the team,” he said. “I’d love to leave this team with a top-four finish.”

Former Liverpool defender Jamie Carragher has said the club should have made more of an effort to keep Gerrard.

“Steven is not someone who would be comfortable just sitting on the bench and, in that sense, he has made the right decision,” Carragher wrote in his column for the Daily Mail.

“Still, I cannot help feeling Liverpool’s hierarchy should have done more to ensure he remained at Anfield.”

Rodgers said he had wanted Gerrard to stay, and that the midfielder wanted to carry on playing and was not ready to move into coaching.

Meanwhile, Reds midfielder Henderson says the club should aim to win the FA Cup this season to give Gerrard a fitting send-off.

The 24-year-old told BBC Football Focus: “That’d be nice for him because he deserves something like that for how good he’s been over so many years for Liverpool.

“That’s what we hope to achieve and it would be brilliant for us as a team and for him personally to get something in his last year.”

Gerrard’s 35th birthday falls on the day of the final at Wembley.

Service providers to be paid promptly in 2015 – NHIA