Six people have been shot dead and at least one other wounded in three locations near Philadelphia, officials in the US state of Pennsylvania say.

Montgomery County police are seeking the suspected gunman, whom they named as Bradley William Stone, 35.

They say he may be armed and dangerous and told residents to remain indoors.

Mr Stone was described as having red hair and wearing military fatigues. He reportedly uses a cane or a walking stick. 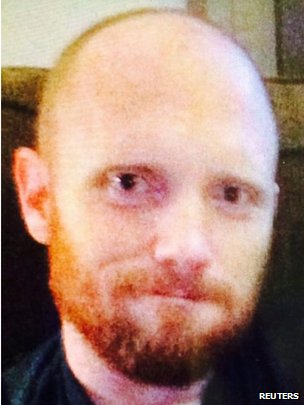 Authorities have identified the suspect as Bradley William Stone

The shootings in Souderton, Lansdale and Harleysville began at about 04:00 local time (09:00 GMT), according to local media reports.

The first shooting took place at the home in Souderton of Mr Stone’s former sister-in-law, Patricia Flick. She was killed along with her husband, Aaron Flick, and the couple’s daughter, Nina, 14. The couple’s 17-year-old son, Anthony Flick, was badly wounded.

The next shooting was at a house in nearby Lansdale where Nicole Stone’s mother, Joanne Hill, and grandmother Patricia Hill were killed.

Nicole Stone was later killed at her home in Harleysville. Neighbours reported seeing Mr Stone fleeing with their two children and raised the alarm.

Reports said that the shootings may have been triggered by a custody dispute.

The children were reported to have been found safe a short distance away, says the BBC’s Barbara Plett-Usher in Washington.

Police later surrounded a home in Pennsburg, where the suspect is a resident, and called out by megaphone: “Come to the front door with your hands up. You’re under arrest.”

“As I stand here right now, we do not know where he is,” she said, adding that officers had recovered his mobile phone and his car.

Later on Monday, police descended on Doylestown, east of Souderton, following reports that a man answering Mr Stone’s description had tried to steal a car.

Local schools were issued with orders to “shelter in place”.

“This a tragedy, this is a nice quiet town,” local resident Audrey Gallina told the Philadelphia Inquirer. 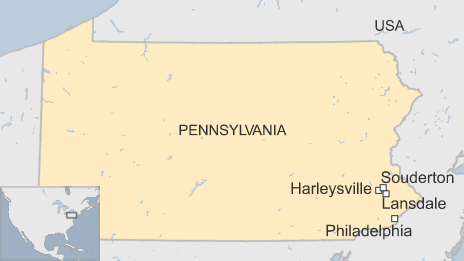