Police in Los Angeles have opened an investigation into a woman’s claims that Bill Cosby molested her when she was 15 years old.

Judy Huth, one of several women to have recently made allegations against the actor, met with detectives on Friday.

She filed a civil lawsuit against him earlier in the week.

Mr Cosby is counter-suing the 55-year-old, saying she attempted to extort money from him, and has described her claims as “absolutely false”.

Meanwhile, work crews have had to clean Mr Cosby’s star on the Hollywood Walk of Fame after it was vandalised.

LAPD chief Charlie Beck had said people making allegations of sexual abuse against Mr Cosby should speak with his officers, even if their claims were outside the statute of limitations for prosecutions.

In her legal action, Ms Huth claims Mr Cosby gave her alcohol and forced her to perform a sex act on him in a bedroom of the Playboy Mansion around 1974.

She is seeking unspecified damages for “psychological damage and mental anguish”, which have only recently been linked to the incident.

Mr Cosby’s court filing seeks legal fees of $33,000 (£21,000). It says a psychologist has not supplied relevant certification about the effects on Ms Huth and says she tried to sell her story to a newspaper 10 years ago. 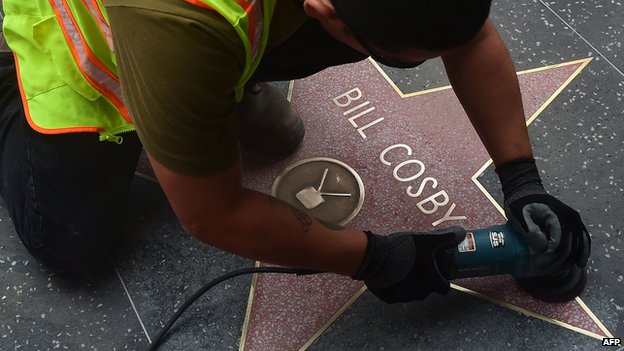 More than a dozen women have alleged the 77-year-old star drugged and sexually assaulted them.

Mr Cosby has never been charged with a crime, and his lawyers have denied many of the claims, which date back to the 1960s. But the accusations have led to his stand-up tour being called off and the cancellation of a number of TV projects.

Unemployed dad auctions himself on eBay to raise cash for Christmas