Serge Lazarevic (centre) and Philippe Verdon (R) were kidnapped in 2011

The last French hostage to be held by Islamist militants has been freed after three years, French President Francois Hollande has announced.

Serge Lazarevic was snatched in Mali in November 2011 along with fellow Frenchman Philippe Verdon.

Militants from the Al-Qaeda in the Islamic Maghreb (AQIM) group killed Mr Verdon last year in retaliation for France’s intervention in Mali.

Mr Hollande said there were no more French hostages waiting to be freed.

Mr Lazarevic, he said, was in “relatively good health” despite the conditions of his captivity and was on his way to the neighbouring country of Niger from where he would return to France.

AQIM kidnapped a number of Western hostages before the French military deployed its forces against the group in January 2013.

There were at one point at least 14 French nationals being held by Islamists in West Africa.

“There are no more French hostages in any country in the world,” Mr Hollande said.

He thanked the authorities in Niger and Mali, who had “worked towards this happy outcome”.

There have been no details about how the release of Mr Lazarevic was secured.

The French government has repeatedly denied paying ransoms for hostages. 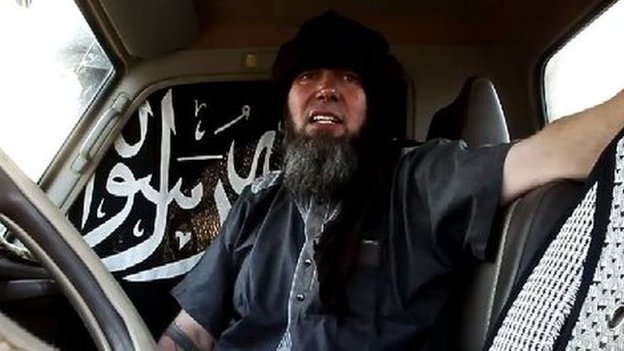 Serge Lazarevic, shown in a still from an AQIM video, was held for over three years

During his captivity, Mr Lazarevic appeared in several AQIM videos.

There was concern for the 50-year-old father’s health in November after he was filmed pleading for his release.

He looked frail in the video and was filmed alongside a second hostage, Dutchman Sjaak Rijke.

It is not clear where the two men were held or whether they were held together.

Mr Rijke was kidnapped in November 2011, while visiting the city of Timbuktu as a tourist. There has been no news from him since the video.