Jordan plane ‘not shot down by IS’

The Jordanian plane that crashed in Syria was not shot down by Islamic State (IS) militants, the US says.

The plane was lost in IS territory on Wednesday morning, and the pilot has been captured.

IS militants said that they shot down the plane with a heat-seeking missile. However, the US says “evidence clearly indicates” that this is not true.

Jordan is one of four Arab states in a US-led coalition that has launched air strikes on IS targets in Syria.

The F-16 fighter jet is the first coalition aircraft to be lost on IS territory since air strikes began in September.

IS fighters have published photographs showing the pilot being captured. They named the pilot as Flight Lieutenant Moaz Youssef al-Kasasbeh.

In a statement, US Central Command (Centcom) said it strongly condemned the actions of IS, and confirmed the group “has taken captive the downed pilot”.

It did not say what could have caused the plane to crash.

However, it said it would not tolerate IS’s “attempts to misrepresent or exploit this unfortunate aircraft crash for their own purposes”.

“Evidence clearly indicates that Isil [IS] did not down the aircraft as the terrorist organisation is claiming,” it added. 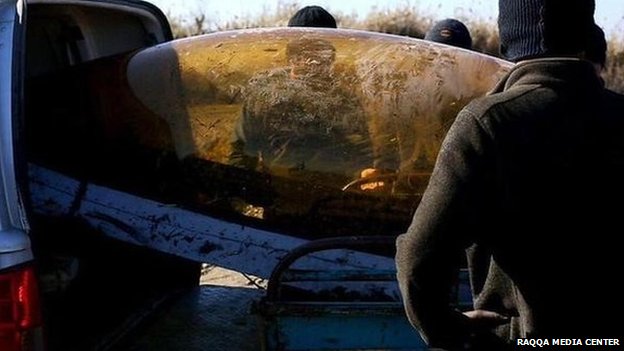 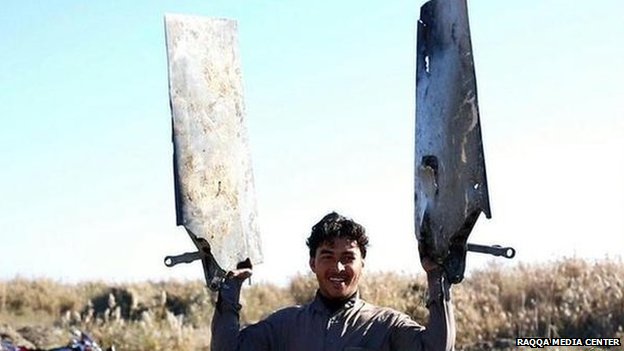 Centcom added that the Jordanians were “valued partners” whose pilots had “performed exceptionally well” during its campaign.

The US had launched planes after the Jordanian jet crashed, but the pilot was seized before a rescue attempt could be made, a US official told Reuters, speaking on condition of anonymity.

The pro-IS Raqqa Media Center posted photos on its Facebook page that appeared to show the captured pilot, and men taking the aircraft out of what appeared to be a lake or river.

In a statement, the Jordanian military said: “Jordan holds the group and its supporters responsible for the safety of the pilot and his life.”

“May Allah plant mercy in your hearts and may you release my son,” he said.

UN Secretary General Ban Ki-moon also expressed “concern” for Lt Kasasbeh, and called on him to be treated “in accordance with international humanitarian laws”. 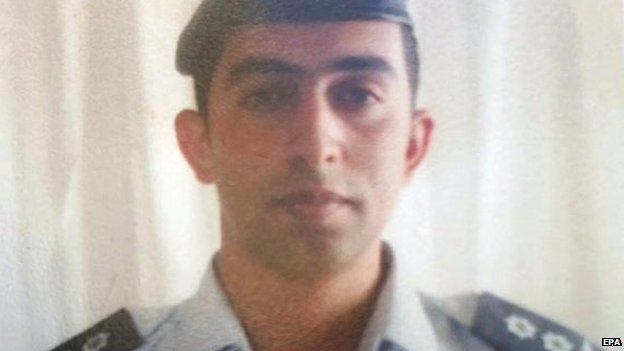 The air forces of Jordan, the US, UAE, Saudi Arabia, and Bahrain have carried out hundreds of air strikes on IS in Syria in the past three months.

Many of the targets have been in and around Raqqa, which is the de facto capital of the “caliphate” whose creation IS proclaimed in June.

Correspondents say that IS is assumed to have a limited air defence capability.

However, IS fighters have downed Iraqi and Syrian government planes in the past, and the group’s full capabilities are not known.