Share on FacebookShare on TwitterShare on Whatsapp
Lawyer Gloria Allred has urged US comedian Bill Cosby to waive the statute of limitations to allow women alleging he sexually abused them to “obtain justice”.
Ms Allred spoke at a press conference alongside three women who said they had been abused by Mr Cosby.
Mr Cosby, 77, is facing a series of renewed allegations that he drugged and sexually assaulted over a dozen women.His lawyers describe the claims as “discredited” and “defamatory”.Mr Cosby has had television shows cancelled and some appearances dropped in recent weeks amid the allegations.

‘Lost count’Speaking at a press conference on Wednesday, Ms Allred said many of the alleged victims had contacted her to determine what legal rights they had.

“Unfortunately, I had to tell them it was too late for them to file a lawsuit against Bill Cosby because of the statute of limitations – for most women it is simply too late to have their day in court,” she told reporters.

The women’s rights lawyer presented two courses of action to, in her words, “determine whether Bill Cosby is a saint or a sexual predator”.

Bill Cosby has not specifically addressed the allegations

Firstly, she suggested Mr Cosby waive the statute of limitations to allow the alleged victims to present their claims and for him to present his defence.

The second option, she said, would be for Mr Cosby to place $100m (£64m) in a fund, from which a panel of retired judges would decide what compensation would be appropriate if a woman’s claim was found to have merit.

Three women then gave accounts of the alleged attacks, with two saying they had been drugged before being assaulted.

When asked how many women had contacted her to make a claim, Ms Allred said: “I literally have lost count.”

The press conference came a day after another woman filed a lawsuit against Mr Cosby over allegations of sexual assault when she was under-age – said to be the first such claim to come to light. 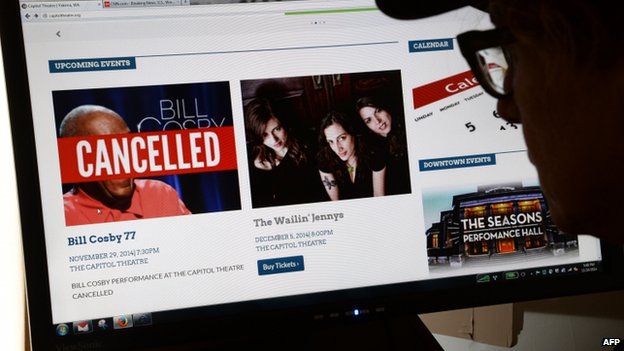 Judy Huth says she was 15 when she was molested by the comedian at the Playboy Mansion in Los Angeles. As she was minor at the time, her case can still be heard.

Earlier this week, Bill Cosby resigned from the board of trustees of Temple University in Philadelphia, where he was once a student, amid the allegations.

Several broadcasters have also shelved projects with Mr Cosby, including NBC and Netflix.

Two of his performances scheduled for the weekend at a venue in the north of New York were cancelled on Wednesday, AP reports.

Nearly half of the audience of the show in Tarrytown had reportedly requested refunds.

In 2005 a woman who accused Cosby of drugging and sexually assaulting her brought a lawsuit against him, but the case was settled out of court.