AirAsia boss Tony Fernandes says he is “devastated” that a plane carrying 162 people from Indonesia to Singapore has gone missing.

Bad weather was reported in the area but no distress call was made and no wreckage has been sighted.

The search operation was halted for the night and resumes at about 23:00 GMT.

Shocked relatives gathered at both airports, in Singapore and Surabaya, poring over the passenger manifests.

“Our concern right now is for the relatives and for the next of kin – there is nothing more important to us, for our crew’s family, and for the passengers’ families.

“We hope that the aircraft is found quickly, and we can find out the cause of what has happened.”

An air and sea search was immediately launched, with vessels and aircraft from Indonesia, Singapore and Malaysia scouring an area near Belitung island, but nothing was found before nightfall.

The Indonesian search and rescue force will resume at dawn with 12 ships, three helicopters and five aircraft. There will also be two C-130 planes – one each from Malaysia and Singapore – and three ships from those nations.

Dense storm clouds were reported in the area at the time the plane lost contact. 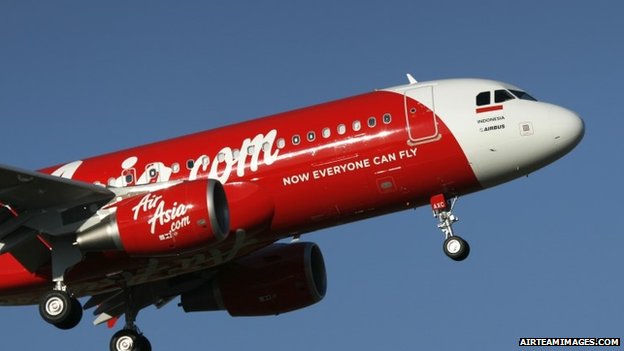 The Airbus, pictured here on an earlier flight, disappeared about an hour after takeoff 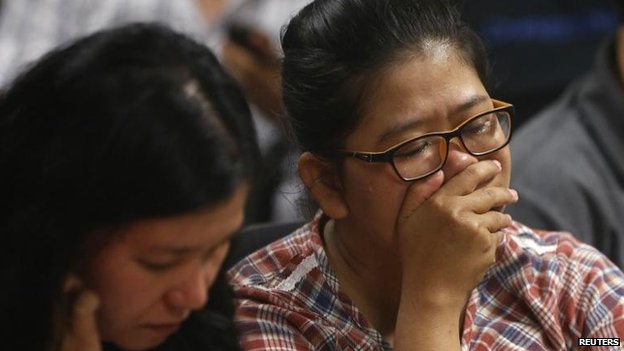 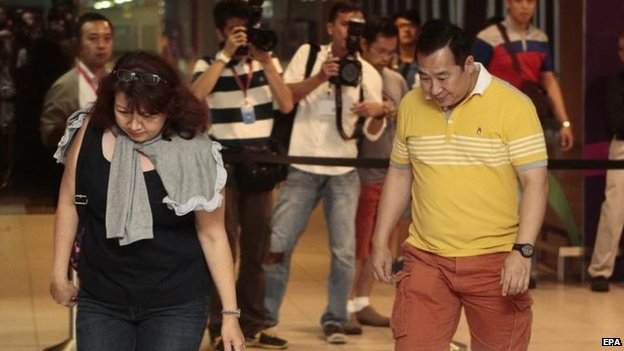 But Indonesian transport ministry official Djoko Murjatmodjo said the request “could not be approved at that time due to traffic, there was a flight above, and five minutes later [flight QZ8501] disappeared from radar”.

Geoffrey Thomas, of airlineratings.com, told the BBC that radar plots had shown the plane was flying at 353 knots, 100 knots slower than it should have been.

Although he stressed it was only speculation, he said it was possible the pilots may have lost data on air speed because of an ice-up of pitot tube instrumentation. This was thought to have had happened in the loss of the Air France Airbus A330 over the Atlantic Ocean in 2009.

A recent safety study showed only 10% of fatal incidents occurred at cruising altitude.

The AirAsia group has previously had no fatal accidents involving its aircraft.

Mr Fernandes, who has owned AirAsia since 2001 and turned it into a highly successful operation, tweeted: “This is my worst nightmare.”

The AirAsia Indonesia plane in question was delivered in 2008, has flown 13,600 times, covering 23,000 hours, and underwent its last maintenance on 16 November.

The captain had more than 20,500 flight hours, almost 7,000 of them with AirAsia, Mr Fernandes said.

Special centres were set up at both Singapore’s Changi airport and the Juanda international airport in Surabaya.

There were 155 passengers on board, the company said in a statement:

This has been a difficult year for aviation in Asia: Malaysia’s national carrier Malaysia Airlines has suffered two losses – flights MH370 and MH17.

Flight MH370 disappeared on a flight from Kuala Lumpur to Beijing in March with 239 passengers and crew. The wreckage, thought to be in southern Indian Ocean, has still not been located.

MH17 was shot down over Ukraine in July, killing all 298 on board.

Youth urged to create their own businesses