Ashraf Ghani said there was "no justification for such acts"

He is among many world leaders condemning how the agency imprisoned and questioned al-Qaeda suspects.

A US Senate report on the programme has said the harsh methods did not lead to unique intelligence that foiled plots.

The report also concluded the agency misled politicians and public about the 2001-2007 programme.

The CIA has defended its actions in the years after the 9/11 attacks on the US, saying they saved lives.

And President Barack Obama has said it was now time to move on, despite acknowledging some of the CIA’s actions amounted to torture.

None of the countries where the prisons were located has been identified in the report, but several countries suspected to have hosted sites reacted strongly to the publication.

In a press conference on Wednesday, Mr Ghani, who became president in September, called the report “shocking”.

“There is no justification for such acts and human torturing in the world.”

He vowed to investigate how many Afghans had suffered abuse at US detention centres.

On Wednesday, US military officials said the final prisoners had left Parwan Detention Center, bringing to an end the US operation of any prisons in the country after more than a decade of war.

Aleksander Kwasniewski said that he put pressure on the US to end brutal interrogations at the prison in 2003.

“I told Bush that this co-operation must end and it did end,” Mr Kwasniewski told local media.

Lithuanian Prime Minister Algirdas Butkevicius called on the US to say whether CIA used his country to interrogate prisoners.

A previous Lithuanian investigation found the CIA set up and ran a facility near the country’s capital but could not determine if prisoners were held there.

Germany’s foreign minister also criticised US actions on Wednesday in the Bild newspaper, saying “what was then considered right and done in the fight against Islamist terrorism was unacceptable and a serious mistake”.

But Frank-Walter Steinmeier praised Mr Obama for releasing the information, calling it a clear break with his predecessor.

UN Special Rapporteur on Human Rights and Counter-Terrorism Ben Emmerson said that senior officials from the administration of George W Bush who planned and sanctioned crimes must be prosecuted, as well as CIA and US government officials responsible for torture such as waterboarding.

“As a matter of international law, the US is legally obliged to bring those responsible to justice,” Mr Emmerson said in a statement made from Geneva.

And Human Rights Watch executive director Kenneth Roth said that the CIA’s actions were criminal “and can never be justified”. 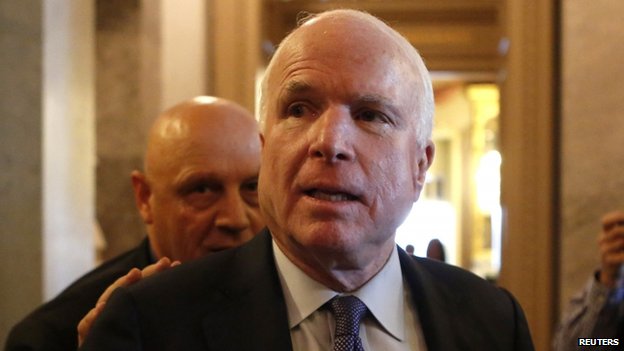 Correspondents say that the chances of prosecuting members of the Bush administration are unlikely.

The US justice department has said that it has already pursued two investigations into mistreatment of detainees since 2000 and concluded that the evidence was not sufficient to obtain a conviction.

Mr Obama said on Tuesday that he hoped that the publication of the report would “help us leave these techniques where they belong – in the past”.

He banned harsh interrogation techniques after taking office in 2009.

Some Republicans on the Senate Intelligence Committee released a minority report, accusing the Senate report of having a “flawed analytical methodology”, “inadequate objectivity” and “political considerations”.

Barack Obama said some of the techniques amounted to torture

Influential Republican Senator John McCain, who was once held as a prisoner of war, argued that torture “rarely yields credible information”.

The CIA has argued that the interrogations had helped save lives.

“The intelligence gained from the programme was critical to our understanding of al-Qaeda and continues to inform our counterterrorism efforts to this day,” director John Brennan said.

However, the CIA also acknowledged mistakes in the programme, which was known internally as Rendition, Detention and Interrogation and took place from 2002-07.

Didieye will be allowed to contest if… – Kofi Adams